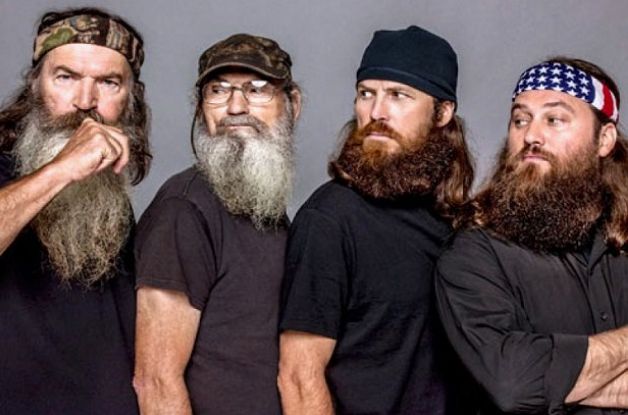 You just thought they were everywhere. Now they’re up in your business too. TV's “Duck Dynasty” hicks with a $400 million brand have something to say to gay viewers who love or love to hate their backwater sensibilities: Repent!

We all knew too well that the South sucks (hard) on gay rights and LGBT issues, and that gay Atlanta is a perfect blue island in a red state sea. So it shouldn’t be a surprise that the Louisiana patriarch and founder of the Duck Commander family business isn’t keen on gays. But somehow we still can’t stop gawking at it like a train wreck, much as we do every other subtitled load of crap that comes out of Phil Robertson’s mouth.

This time, “What did he say?” (top photo) wasn’t just because of his swamp-laden accent. The Gay & Lesbian Alliance Against Defamation is up in arms and has our backs over Robertson’s recent public blast of homo “sinners.” He says you’ll spend eternity in hell with terrorists, drunks, cheats and liars.

GLAAD is trying to get A&E to denounce its cash cow. In the meantime, we can parse over what the duck daddy told GQ to get the gay media watchdogs all riled up.

What does repentance entail? Well, in Robertson’s worldview, America was a country founded upon Christian values (Thou shalt not kill, etc.), and he believes that the gradual removal of Christian symbolism from public spaces has diluted those founding principles. (He and Si take turns going on about why the Ten Commandments ought to be displayed outside courthouses. [Sounds familiar.] He sees the popularity of Duck Dynasty as a small corrective to all that we have lost.

What, in your mind, is sinful?
“Start with homosexual behavior and just morph out from there. Bstiality, sleeping around with this woman and that woman and that woman and those men,” he says. Then he paraphrases Corinthians: “Don’t be deceived. Neither the adulterers, the idolaters, the male prostitutes, the homosexual offenders, the greedy, the drunkards, the slanderers, the swindlers—they won’t inherit the kingdom of God. Don’t deceive yourself. It’s not right.”

During Phil’s darkest days, in the early 1970s, he had to flee the state of Arkansas after he badly beat up a bar owner and the guy’s wife. Kay Robertson persuaded the bar owner not to press charges in exchange for most of the Robertsons’ life savings. (“A hefty price,” he notes in his memoir.) I ask Phil if he ever repented for that, as he wants America to repent—if he ever tracked down the bar owner and his wife to apologize for the assault. He shakes his head.

“I didn’t dredge anything back up. I just put it behind me.”

As far as Phil is concerned, he was literally born again. Old Phil—the guy with the booze and the pills—died a long time ago, and New Phil sees no need to apologize for him:

“We never, ever judge someone on who’s going to heaven, hell. That’s the Almighty’s job. We just love ’em, give ’em the good news about Jesus—whether they’re homosexuals, drunks, terrorists. We let God sort ’em out later, you see what I’m saying?”

Yes, we see what you’re saying alright. Better watch out, Phil. GLAAD just might sic its darling and gay Atlanta’s own daddy on you.