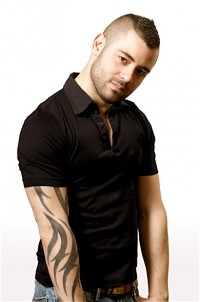 If you’ve been waiting for a DJ who bucks the system, cranks out kick-ass unauthorized remixes and mashes together every genre of music, DJ Drew G and Friday’s “Dirty Pop” tour stop at the Heretic are for you.

But what is “Dirty Pop”? For one thing, rebellious. Rather than remixing dance hits alone and calling it another gay club night, badboy Drew G (photo) and Brian Cua create sonic soundscapes, cycling dance hits in the now right alongside totally unauthorized “Glee” remixes and the harder-edged likes of Van Halen, Pink Floyd, Chuckie, Shep Pettibone and Led Zeppelin.

“‘Dirty Pop’ is the perfect name for what we do,” Drew says of his work with Cua. “It’s ‘dirty,’ but you like it. We’ll make sure you react. It freaks some people out. ‘Glee’ has taken my stuff off YouTube so many times it’s not even funny. They just don’t get how great their stuff translates into dance music.”

So it’s only at nights like “Dirty Pop” that you’ll catch some of what these boys are throwing down. Drew and Cua’s next-gen sound takes a packed dance floor on an electro-dance-rock-pop journey. On Friday at the Heretic, Atlanta gets its first taste of what others are already requesting for return engagements.

In addition to New York venues from the poshest pits to the hippest dives, Drew G has reigned many a night in D.C., Philly, L.A., and across Europe. And yeah, not too many DJs can say they played one of Barack Obama’s inauguration parties. Hello. The world is watching.

Drew has also dipped his toes into television, producing tracks for “RuPaul’s Drag Race” and for “Make Me a Supermodel’s” Ronnie Kroell, who we’ve drooled over in the Morning Fix.

Kroell called Drew a “hottie with a heart,” and being easy on the eyes never hurts a DJ’s career. But Drew says he doesn’t think of himself as sexy, he tells Raannt.

“You know, I don’t really consider myself good looking,” he says. “So I don’t know how it might help or hinder my career. A lot of people say they are intimidated by me, but I really don’t believe that.”

He delves into so many different kinds of music and artistry, but who are you not likely to hear in a Drew G set?

“I kinda hate Kylie,” he says. “Her voice makes me want to claw my eyes out. But I admit, if she had a big hit, I’d have to play it and cope.”

And what is he really thinking about when he’s in the booth? Take note, Atlanta:

“When my next Jager shot’s coming.”

It’s a big weekend at the Heretic. Joining Hearts favorite Roland Belmares returns to Atlanta at the Heretic on Saturday night for one of his signature sets.