Atlanta writer Kirsten Ott got her dream June wedding to Maria Palladino in 2009. The “dreamy and romantic” event was almost perfect—save for a distinct lack of wedding magazines that are gay inclusive.

“After Maria proposed to me in Central Park on Leap Year in 2008, I immediately went out and bought every wedding magazine that Barnes & Noble stocked,” the newlywed says. “And I didn’t see us on any single page. It bothered me so much that here it was in the early years of the 21st century, and we don’t have a national wedding magazine recognizing that couples aren’t always formed by one man and one woman?”

“It just felt like a calling to fill that void,” Kirsten says, noting the pair’s decade each of experience in their respective fields. “We had the resources between us to have a go at this, with the intention of hopefully attracting investors to help take us to print.” 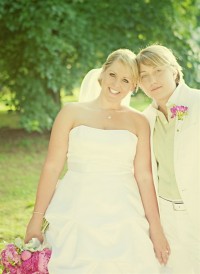 Response to the magazine has been “overwhelmingly positive,” the editor-in-chief says. You can get it in on the excitement at Thursday’s launch party atop the Hotel Palomar in Atlanta. Look for a raffle, complimentary signature cocktails and prizes from local hotspots. The raffle benefits Georgia Equality.

“This is going to be one fabulous cocktail party,” Kirsten says. “We’re gathering to celebrate not only the launch of Equally Wed, but also marriage equality. Be amongst friends and allies while toasting to everyone’s right to the pursuit of happiness and love. And besides tipping your valet and buying a couple of $1 raffle tickets for a very good cause, the night is free. … What’s not to love about that?”

So if you’re still asking, “Why a gay-specific wedding mag?” there was at least one gay-specific need that the Palladino’s needed to address at their wedding (second photo).

“We didn’t call Maria a groom or a bride, for truly, she didn’t fit either mold,” Kirsten says. “So early on in our 18 months of wedding planning, she coined the term ‘broom’ and it really caught on with our friends, family and vendors.”

Accordingly, fashion is just one regular section of the new magazine. In addition to new articles each week on various topics, each quarterly seasonal issue (summer kicks off July 1) will include:

• Real Weddings: Features about weddings and the love story behind them.
• Fashion: For gay men, masculine women, feminine women and beyond.
• Beauty & Grooming: “Our community has different needs than the straight crowd—makeup for men, grooming for women,” Kirsten says.
• Travel: Honeymoon and destination-wedding articles written exclusively by gay journalists who can vet the destinations on gay friendliness.
• Legal Information: Topics like getting around the three-day waiting period in the states where gay marriage is legally recognized and protecting your new bond through legal paperwork.
• Also: DIY craft projects, spotlights on gay-friendly wedding vendors, and service pieces.

“The other huge highlight of our website is our Local Resources, a marketplace of gay-friendly wedding vendors throughout the United States and Canada,” Kirsten says. “Planning one’s wedding is an exciting and exhilarating time, and it can be downright heartbreaking to get any negative vibes from a potential wedding vendor—whether they’re not sure it’s OK with their religion or their government. We’re here to help LGBTQ couples avoid that all together by doing the research for them.”

Sounds like a plan. So get planning. Visit Equally Wed to get started.