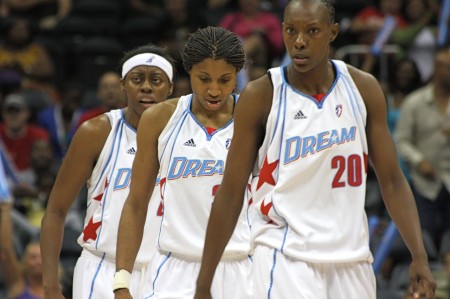 Nine LGBT groups in metro Atlanta stand to benefit from the Atlanta Dream’s Community Night on Saturday when the WNBA team takes on the Seattle Storm.

As part of effort organized by Kardon Events, $5 of every ticket purchased — they come priced at $19 or $37 — will be donated to one of the following LGBT groups:

To purchase tickets, head to Kardon’s Community Night page, click on the group you want to support, fill out the order form and fax it to the Dream.

Saturday is also the team’s second annual Dream Pink night to promote breast health awareness. Fans can take part in a silent auction on the concourse to bid on memorabilia, including pink autographed shoes from Ivory Latta and Lisa Leslie, a pink WNBA basketball signed by the Dream team, and pink game-worn Dream jerseys.

The Dream will also honor 20 people as Women of Inspiration during a pre-game mixer and on-court ceremonies. Last year, Anne Barr — who founded the Decatur Women’s Sports League — received one of the awards in a ceremony that involved WNBA President Donna Orender and Atlanta City Council President Lisa Borders.