Even before “RuPaul’s Drag Race” starts its third season with two Atlanta contestants on TV, several local legends are on tap to run Dragnique, a fierce, live, seven-week drag competition each Friday on the stage at Jungle.

Fueled by a desire to find fresh talent and raise money for local charities, Dragnique’s “Survivor” meets “Drag Race” combo begins Jan. 7. The contest pits six challengers against each other in weekly eliminations to see who comes out on top by combining crazy challenges, a showing of drag techniques, and every gay man’s favorite: final judgment.

The first week’s challenge is Drag On A Dime. The contestants received $10 and 15 minutes to shop at The Dollar Store and must incorporate the purchases into their costumes. 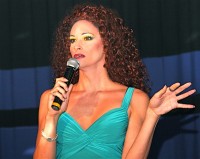 As emerging talents fight their way to the finish, Eve Michaels (top photo) hosts, and “RuPaul’s Drag Race” alumna Nicole Paige Brooks (second photo) serves as head judge. A guest judge each week will collect all the tips from the show for the charity of their choice. On Friday, Bubba D. Licious kicks things off for Pets Are Loving Support.

Other guest judges include Monica Van Pelt, Jasmine Antoinette, Wild Cherry Sucret and Brent Starr. Also look for guest talent performances and judging by other Atlanta favorites. The contest is sponsored by Brushstrokes and other local gay-owned businesses.

Showtime each week begins at 10 p.m., but get there when the doors open at 9:30 for the best seat. Want to see more? Michaels recorded this video to tease you into a frenzy almost as high as her hair.