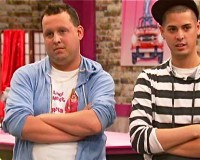 As “Ru Paul’s Drag Race” continues its third season, there are increasingly few places to boldly go where no reality show has gone before. This week, the show freshens a group challenge with a Sci-Fi extravaganza.

We start with a silly ESP challenge in which the girls must pair up with “the person they’re most psychologically in sync with.” Whatever that means, the contestants relish the task like giggling 7th graders in science lab. They must “read each other’s minds,” i.e. guess, at some dumb stuff like what color a stuffed cat is, and Atlanta’s own Mariah and Phoenix get the most answers correct.

Speaking of 7th grade, the prize for the Atlanta queens is that each is to captain her own team, which they choose one by one, dodgeball style. Poor Mimi (top photo, left), who is a broken heel away from a mental breakdown at any given moment, is chosen last. Despite her theater background, no one likes her. 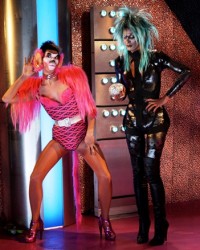 Phoenix’s team has some highlight performances, most notably a funny pair of robotic twins. But Delta doesn’t know her lines, and Phoenix is clearly uncomfortable in the situation. Mariah’s gang does better, with another set of hilarious twins played by Shangela and Alexis connected by a hair weave, and Manila as a space monkey (second photo, left) with her own language. Even Mimi’s overacting works in their favor.

The queens take the main stage in their best futuristic space couture. Guest judge Lily Tomlin joins Ru, Santino, Visage and Torassoni. The judge’s table has been crowded this year, so individual critiques are often lost. Shoutouts to some hot runway looks: Mariah, Raja, India, Alexis, and yes, even Shangela. Big shout out: We love Phoenix’s Genderfucking Cyborg-Gaga badass, which beats a stage full of Judy Jetson Hookers in our opinion. Santino agrees, but he’s drowned out by the other judges who can’t get past her poor performance in the “Uranus” video.

But Phoenix’s runway look can’t save her team from losing the main challenge. Mariah’s entire team, including an Uncle Fester-looking Mimi, are deemed safe. When the critiques come, Phoenix is called “the weakest link.” Ouch. Delta misses the runway look by so much, she joins our hometown girl in the bottom two who must Lip Synch For Their Lives. Stop reading if you don’t want to know what happens.

When the music for “Bad Romance” starts, we’re thinking, “Phoenix has got this.” Honestly, the edit is so harsh, it’s hard to tell who did better, but even amid quick-clips from one contestant to the other, we saw some striking poses and a fierce walk from Phoenix. Sadly, just like last year, the first group challenge results in the first Atlanta competitor to go home.

Despite Shangela’s mouth running about Delta being herself and Phoenix copying Gaga and looking like a man, we’re floored when Phoenix is asked to sashay away. Bitter or not, her comment rings true: She shouldn’t have to leave with less worthy queens allowed to stay.