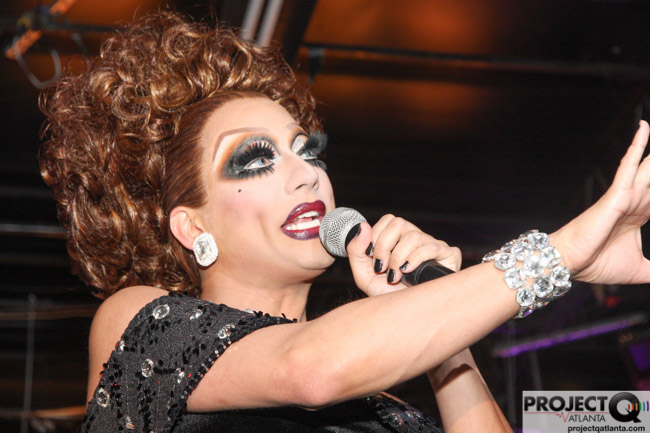 Bianca Del Rio, fresh from her Season 6 win on “RuPaul's Drag Race,” blasted into Atlanta on Tuesday and delighted a crowd of hundreds with her bawdy humor, draglicious reads and roast toast of a former rival.

She was just a little excited.

Get ready ATLANTA! I'm here at JUNGLE! Here we go!

Del Rio's sold-out appearance at Jungle came during a special edition of the club's revitalized Fantasy Girls series that has attracted the likes of “Drag Race” competitors Sharon Needles, Latrice Royale, Willam Belli and Sonique. It also served as a kickoff to Peach Party, the weekend-long dance party of six events over three days featuring some big-name powerhouses in the DJ booth.

On Tuesday, the evening belonged to Del Rio. Her comedy routines brought the crowd to its feet, as did her toast with a little roast of Trinity K. Bonet, the Atlanta queen who competed against Del Rio on “Drag Race.” That didn't always go well on the show but when Del Rio invited Bonet on stage, it was all laughs and hugs.

“I adore this mother fucking bitch. If I would have been in a situation to have to do a lip synch against this mother fucker, girl,” Del Rio says in the video below (NSFW). “One of the most brilliant performers and I'm proud to say one of my favorite people in the world.”