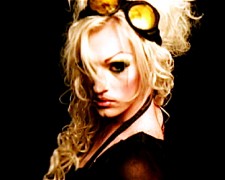 As if Logo hasn’t worn out enough repeats of last week’s “RuPaul’s Drag Race” episode in the last seven days, the network is not offering a new episode Monday. Maybe it’s a respectful mourning period for Atlanta.

The Feb. 27 episode of “Drag Race” took the audience on a random trip down memory lane and the contestants on a tour of cheesy game shows. And yes, thanks to some slack in the scheduling, you can basically watch it uninterrupted on Logo (Comcast channel 288) for another seven days.

The mini-challenge was a ghetto version of “The Price is Right,” where contestants guessed the retail prices of some drag staples like duct tape for the twig and berries and Preparation H (for under the eyes, darling).

In the final round, dragified as the Showcase Throwdown, Raven—a bitch of a bitch if there ever was a bitter, mean-ass bitch—won a call to mommy and a real-human-hair wig. She’s been in the bottom two twice, so it made her feel good… like we care.

The call home was uneventful, and as much as we tire of Raven’s bitterness, we must admit that she has yet to fail in turning it out on the runway at the end of each show.

From there, we moved on to the main event and the title of the episode: “Snatch Game 2010” asked the girls to do celebrity impressions and match wits like the panel on the old “Match Game.” Our guess is that most viewers don’t remember the original show at all, but that didn’t stop Ru and the gang from trying.

Gay comedian Alex Mapa and some actress you never heard of (and never will) were the “contestants” on “Snatch Game,” and the drag racers had to try and impress them with how funny their answers to really stupid questions were.

Sahara did a respectable Whitney Houston. Tyra tried and failed at Beyonce, and Atlanta’s Sonique (photos) was less than inspiring as Lady Gaga.

The only standouts were Pandora and Tatiana. Pandora, the only normal-seeming person on the show who also shows a real flair for comedy, turned in a spot-on Carol Channing with by far the funniest answers. But the big surprise was Tatiana, who has never done a celebrity impression before. Her Britney Spears made the entire challenge segment worth watching.

Of course, then it was time for the runway, where the girls were asked to serve their own personal style. Nothing to do with game shows, but we’re used to non sequiturs on “Drag Race.”

Again, loathe as we are to admit it, Raven looked smashing. Sonique was a masked badass in perhaps her best costume yet, and sadly, Tatiana looked like a $2 hooker.

The results lead us to a big question: Why do the judges (this week including “Clean House” diva Niecy Nash and “actress” Lisa Rinna) spend so much time talking about the runway presentations when they appear to have nothing to do with who “Shantay stays” and who “Sashays away” in the end? The take much less time discussing the challenge, which must be what weighs most heavily on the decision.

Tatiana won the week, despite her cheap streetwalker presentation. Her Britney must have sealed the deal. The bottom two were Morgan and Sonique, who both lacked in the challenge, but both looked stunning on the runway as they always do.

In the final “Lip Sync For Your Life,” Morgan delivered what RuPaul called the “tighest lip synching skills she’s ever seen on the show,” and Sonique did Atlanta proud working every inch of the stage with gymnastics for days. Ru called it the most dificult elimination decision he’s ever had to make.

Many a local heart sank when Morgan was given another chance, and our own Sonique was asked to “Shashay away” in the end. Hardly seemed fair on her first time in the bottom two, and after many an eye-turning stage presentation to date.

So maybe it’s best that “Drag Race” is a rerun this week. Perhaps by next Monday, we’ll be ready to face a cast without an Atlanta queen in the running for the crown.