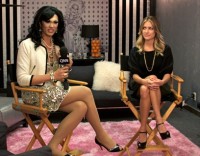 As we whittle down the contenders to become America’s Next Drag Superstar on this season’s “Ru Paul’s Drag Race,” we learn drag axiom #43,762: a girls’ gotta be media savvy and up on current events.

To make sure the remaining contestants are aware of how to control their public persona, this week’s mini challenge is to create a scandalous paparazzi red carpet photo. Bring on the “accidental” panty-free crotch shots and tit-riffic wardrobe malfunctions. Country girl Stacy hangs her real manboob out for air, and Carmen, who is starting to gain momentum with challenge wins under her belt, flashes hemline pelt. They win and become team leaders.

With so many contestants still in the running, the team challenges do allow an efficient way for everyone to compete, but we’re already growing bored of them. Still, once the teams are chosen, they split up to serve morning show realness. Each team must choose two anchors, a gossip maven, a roving reporter and a weathergirl.

The results, which come as a shock to no one, are mixed. On one side, Delta and Raja fall flat as anchors and Carmen seems bored as the gossip reporter. India, who has promised to step it up, takes a step down with an absolutely terrible weather report. Manila is the best of the bunch, even if her Asian reporter (top photo) is totally inappropriate and politically incorrect, dropping her “Rs” and “Ls.” Later, Ru turns her own “love” slogan around in rebuttal, “If you can’t hate on yourself, how the hell you gonna hate on anybody else?”

On the other team, Stacy clunks as one of the anchors, Alexis pageant-queens her way through as cohost, and Atlanta’s own Mariah looks the part but seems nervous as the roving reporter. But Yara (bottom photo) makes the most out of her struggle with English and puts Ru and guest judge Debbie Matenopoulos of “The View” in stitches. Shangela rocks the house as the gossip girl. Her adlibs and surprisingly natural on-camera persona could actually be on TV.

On the main stage, the girls are asked to present their fiercest drag looks to Ru, Michelle, Santino stand-in Billy B (Is this change permanent?), Matenopoulos and guest judge Chloe Sevigny (!). “Fiercest drag look” has nothing to do with the rest of the episode, so it’s another hodgpodge of a runway. We love Mariah’s simple blue velvet gown with minimal accessories. We hate Manila’s pineapple dress. We see where Stacy was going with her poofy, flowy vixen, though it’s true her hair looked like a Yorkie.

Delta looked like a disfigured and bloated mermaid, Carmen went nearly naked again with a horrible newspaper bikini, and India’s attempt to class it up came out like a Country Music star at the VMAs: lost and just wrong. Stop reading if you don’t want to know the results.

After incorrectly selecting Manila as the night’s winner—Shangela, hands down—India and Stacy are named as the bottom two who must Lip Sync For Your Life. In a refreshing turn of events, the girls stick to the performance aspect and forego the full-body contact Smackdowns we’ve seen in recent weeks. Even if not literally, Stacy still tromps all over India, and we wave goodbye to another queen.