‘Drag Race’ recap: One mother of a challenge 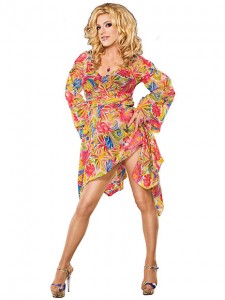 The Top 5 on “RuPaul’s Drag Race” had to turn 60-year old gay men—who’ve never done drag—into their “mothers” and train them to do a lip synch duet for this week’s episode. T is for tragic.

But first, in another waste-of-time mini-challenge, the queens had to match this season’s 12 contestants with their baby photos. Three of them matched the whole dirty dozen, but Tatiana did it in the least amount of time. Whoop-tee-fuckin-doo.

For the win, Tati was allowed to choose the man who would become her drag mother, then assign the other contestants their “victims.” Raven and Tatiana, two true bitches from Hell, both knew that Tatiana would assign Raven last and give her the least to work with. She did.

Raven got an early gay liberation fighter with a full beard. Her “mother” also had 10 belly piercings in his sagging button—and more body hair than an orangutan with a face and body to match. Ever the fighter, Raven transformed the feeble father into a marvelous mother, and much to Tati’s chagrin, won the challenge.

Tatiana unwittingly shot herself in the foot by selecting the best face of the men, but the worst attitude. Bitter queens come in every age, and her choice was a high-maintenance bitch. Come to think of it, maybe it was the exact right drag mother for her after all. He ended up looking OK as a she, but Tati spoiled the makeup with pasty base and brown-black lips a la Joan Crawford.

Raven, who maybe we’re just getting used to, didn’t seem as annoying in her cuntdom this episode as Tatiana. But beyond the bitch scale, Raven’s senior transformation was by far the most appealing. The makeup wasn’t as harsh as the others, and their outfits coordinated without being too matchy-matchy.

Raven also seemed to get the most out of the challenge. She appreciated the fight her “mother’s” generation went through to achieve the gay rights she enjoys today.

None of the other “senior moments” were worth much of a mention. They were all terrible in the stage performance, but in the looks-like-a-woman department, Pandora’s and Jujubee’s silver foxes were OK. Tyra’s looked like a snaggle-toothed hag from a Hanna-Barbera cartoon nightmare. Of course, as Ru’s pet, Tyra was safe, so our beloved Ms. Boxx (photo) and Juju were nominated for elimination.

The two friends had to compete against each other in Lip Synch For Your Life, and Juju scored the “Shante, you stay.” Alas, Pandora “Sashayed away.”

So it’s so long to our favorite contestant, but she was right in her exit interview when she said the judges—this week, including Debbie Reynolds and Cloris Leachman—were extra harsh on her.

“I didn’t bring here what they were looking for. Fuck ‘em.”

Sass, humor and smarts, Pandora. That’s what you brought. We—and the show—will dearly miss it.

Two more episodes. Next time, the Top 4—Tyra, Raven, Juju and Tati—scratch and pull their way toward the April 12 finale with guest judges including Tatum O’Neal. With a flawless face and Ru’s bias, Tyra is all but a lock for the Final 2. Our best guess is that Raven joins her there.

If they were competing to become America’s Bitchiest Drag Queen, Juju would go home next. And if so, a better idea for the finale would be to show never-aired clips of just how bratty the other three can be.