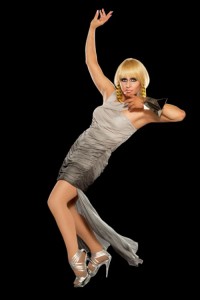 Just when we thought the holiday madness was behind us, Logo’s “RuPaul’s Drag Race 3” brings it all flooding back with 13 new contestants and an oddly timed Christmas-themed debut.

But let’s back it up a bit. If you tuned in at 9 p.m., the show’s regularly scheduled slot last year — it airs at 10 p.m. this season — you got the “Casting Extravaganza” to kick things off. A little Ru goes a long way, and a lot of Ru just goes long.

The casting special is an hour long, the premiere “Drag Race” episode is an hour and a half, and the must-see “Untucked” epilogue is its usual 30 minutes. That’s three hours of Ru and his goils for fans who have really missed the show.

The casting show features audition clips from queens who didn’t make the cut, hot half-naked hopefuls to become this season’s hunky two-man pit crew (the final selections are worth the wait), introductions of 12 contestants to compete this season—including Atlanta’s own Phoenix and Mariah—and even a hilarious, if often tragic, one-day open casting call.

During the open casting, Ru and Santino entertain authentic gems and costumed foolery. Two are selected from the line-around-the-block queens for this season’s “Race”: Delta Work, one of three “big girls” in it to win it this season, and Madonna impersonator Venus D-Lite (top photo). Watch all of the Season 3 contestant videos for yourself. 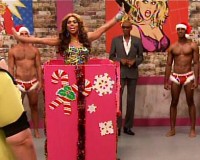 When the premiere episode begins, Phoenix and another contestant both serve up vinyl and a short two-toned wig. The show makes a display of it, but we still say Phoenix does it better and it’s not that big of a deal. And another surprise: Shangela (second photo) is back. Dramatic pause for reaction. Yes, last year’s love-her-or-hate-her contestant gets another shot as the 13th contestant. She arrives in a giant Christmas present to begin the holiday theme.

Yes, it’s Winter Wonderland on the set, and in the tradition of seasons past, a grueling photo shoot starts the competition. This time around, the “Christmas card” photos are taken on a trampoline with snow and a wintry backdrop. Raja (third photo) doesn’t seem special just standing there, but she makes magic happen when it’s time to shine. Incidentally, she’s good buds with Adam Lambert, who makes an appeal in her audition video. Guest spot, anyone?

The girls hit a thrift store for materials and then are given Christmas decorations to supplement their holiday-inspired runway looks for the main challenge. In the workroom, Mimi, another “big girl,” breaks down in tears. Atlanta’s ball queen Mariah steps in and, in the sweetest gesture of the night, helps Mimi pull herself and her look together.

Conversely, Venus is the first to strike as a hardcore bitch with a chip on her shoulder. She won’t be the last, to be sure. It’s hard to separate the contestants and give them room to throw shine or shade until we whittle down the playing field, but Venus, 26, mocks other contestants while boasting about five plastic surgeries to her face. She says it makes her look more like Madonna. We beg to differ.

We’ll remark on a few of the contestants. Proudly half-Filipino Manilla makes for one scrumptious holiday cupcake, and pageant queen Alexis—who is serving up drag legend Erica Andrews in our eyes—looks stunning, too. Raja gives chic Vivienne Westwood and fierce runway, and despite earlier worries, Mimi makes her campy Virgin Mary look work, even if it is poorly sewn. As Atlantans, we also really like Mariah’s snow princess, and Phoenix makes us proud.

At this stage of the competition, we have difficulty knowing where to look. The upshot is this: Eight of the girls, including both Atlanta queens, are deemed safe, and five are singled out as the best and the worst. Stop reading if you don’t want to know what happens.

The supermodel-channeling Raja ultimately takes the win, though we would have given it to Manilla, mainly because she was more Christmassy and scrumptious looking. Both are contenders.

Shangela, who spends the entire episode talking about how much she’s learned and grown, goes against RuPaul’s mantra: She fucks it up. Venus, for all her workroom bluster and shade, tanks too. They lip-synch for their lives, and Venus acts like it’s a physical smack down rather than a time to shine. Ru blusters at the display and sends sorry bitch Venus home.

Come back each week as we separate more wheat from chaff on our way to see who comes out as America’s Next Drag Superstar.