‘Drag Race’ recap: For queens about to rock 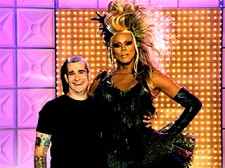 We are tempted to just say “no.” But let’s remember that most of these girls are so far outside their element that they showed real balls—pun intended—in attacking the “Rocker Chick” challenge. Add the requirement to sing live, and we have to take their attempts at face value and give ‘em a break.

Rollins (photo, with Ru Paul) and Nunn were the only ones serving Rock Realness, and we were impressed that Ru was able to snag them for the challenge. But again, we must forgive the girls and give them props for facing the challenge at all.

The friendliest contestant, Jessica Wild, won the night by going at the microphone with real fervor. Her wig was really really bad, but by seizing her inner rocker with head-banging, hair-twirling abandon, we have to hand it to her.

Our favorite rocker in the “most convincing” category was Raven. Yes, we still think she’s a self-important bitch, but that very quality worked in her favor as a rock goddess. She channeled judge Terri Nunn herself (of Berlin “No More Words” fame) with a blond wig dipped in black.

We also are increasingly impressed with Pandora Boxx, far from the prettiest but by far the most versatile contestant. She turned out a great look and performance (for drag, not for real rock, mind you), and in the judges eyes, came in second. Ru called her the Susan Lucci of “Drag Race,” always coming so close to the prize without actually winning.

We imagine Pandora with a career ahead of her in movies and tours with the likes of other talented actors like Edie, Lady Bunny and Varla Jean Merman. Win or lose, she proved once again that when it comes to taking on a character, she’s the one to beat.

Speaking of beating someone, we’d like to flog Tyra with whatever’s handy. Little Miss Perfect—admittedly, gorgeous—gets brattier every week. After last week’s major drama, we were happy to see this challenge baffle her.

We were equally stupefied by her performance, but in a laugh-out-loud way. She can’t sing a note, which isn’t required, but much worse was her look. Think Beyonce Does Futurama Does Clown School, and you’ll start to get an idea. You really have to see it to believe it.

If Tyra didn’t have undeserved immunity, she would have been in the bottom two. That would have been like a cherry on top of her debacle for us, but we can live with just plain humiliation. Even RuPaul’s obvious bias in Tyra’s favor couldn’t have saved her this week.

The biggest disappointment of the night was our girl Jujubee, who was the early favorite because of her singing talent. Poor thing froze on stage and had a backstage meltdown afterwards. She pulled it together to Lip Synch For Her Life against Sahara, who ultimately went home.

We’re at the halfway mark with six contestants still competing to be America’s Next Drag Superstar. We can’t wait to see what fine mess they get into next time.