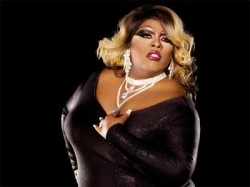 What do you get when mixing bull testicles, deep fried cow brains, drag queens and Tanya Tucker? Why, it’s Episode 3 of “RuPaul’s Drag Race,” of course. There’s one Atlanta queen left among the 10 contestants.

You’d think an episode that includes eating tasty fried treats would hand deliver a victory to Mystique (top photo), the show’s official Big Girl who tries to make a reality show career out of being different. It doesn’t work for the Texas native, who again finds herself in the bottom two by show’s end.

This week’s episode was annoyingly country. As in RuPaul dressed in sans-drag Western wear and trying to fake a country accent. Even her years taking dollars from country gays in Atlanta didn’t help make it convincing. The girls had to create a country-themed commercial, too, and one of the guest judges was Tanya Tucker, who seemed a bit out of sorts. The runway show was Country Couture, and there were enough clichés to make a gay cowboy gag.

The mini-challenge was an eat off. Not sure how that relates to the skill set of drag queens, but who are we to question RuPaul? The queen of drag, by the way, hit Atlanta on Tuesday to pitch her new book.

To no one’s surprise, Mystique won the mini-challenge by emptying her basket faster than Morgan, who puked after a taste of cow brains. Now that we blame her, but how lady like is that?

To the victor goes the spoils, so Mystique captained a team for the main challenge, which entailed shooting a commercial for Disco Extra Greasy Shortening. Sell it country queen style, girl! And you thought we were kidding about overdoing the country thing?

Raven got a taste of karma as she was picked to play a chicken character for Team Morgan. By karma, we mean a little payback for Raven, who went head-to-head with Nicole Paige Brooks from Atlanta Georgia last week and won. She was quite the bitch in the process. And again this week, she went on a bit of bitch fest with Morgan as they dissed Mystique for being such a Big Girl. Not classy, ladies.

The banter stung Mystique, who until this point has shown a tough exterior and has owned her girth in a way that makes all big girls proud.

“Words are words. People think words don’t hurt cause they are just words, but when you hear it everyday … Fuck everybody else,” Mystique says.

The chicken for the other team turns out to be Jessica Wild. You know, the Puerto Rican cutey who’s not so well equipped in the English speaking department. Don’t worry. She’s only supposed to introduce and close the commercial — that’s not critical, is it? 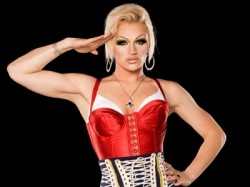 Team Mystique fumbles their lines during an impromptu reading for RuPaul, and Team Morgan nails it. So RuPaul offers that staple of all reality shows – the twist. The teams must swap scripts, and that helps level the playing field.

Actress Kathy Najimy brings it as the director for both commercials, barking directions and criticisms as RuPaul sits next to her offering country cliché after country cliché. Enough already.

And again with the shirtless and muscled male assistants. This week, they help during the commercial shoots and then – complete in jean shorts and boots – offer cocktails to the ladies when they complete the task. If only they had hunks like that in “Dukes of Hazzard.”

The surprise of the episode proved to be Tyra, who only a week ago was a lazy and disgruntled participant who tried to drag everyone down into her cesspool of negativity. But she nailed her role as the baby for Team Morgan’s commercial and topped everyone with her runway outfit. She won the crown this week and immunity for Episode 4.

What of our remaining Atlanta girl? Sonique (bottom photo) again keeps a low profile and plays it safe. It works as she moves along to the next episode by staying off the radar with a short leather vest, cowboy hat and pants. We’ll see how long the stay-safe strategy works, but we also look forward to seeing more of our local rep.

While Mystique proved she can eat a basket of fried food faster than any drag queen, her team lost the larger challenge. When it came to the runway show, the Big Girl was confused. She was supposed to deliver Country Couture; instead, she came to the runway with her self-described Normal Mall Wear Country. Um, yeah. It looked remarkably similar to the outfit she wore during filming of the commercial.

In front of the judges, Mystique stammered on justifying her outfit when she would have been better served by just wearing something else. Tucker offered this simple but cutting critique: “It’s a bummer about the outfit.”

In the end, the outfit was the icing on the cake for Mystique. It seems she is the one big drag queen who can’t find interesting costumes. Her lack of Country Couture made the decision even easier for RuPaul, who noted that in three weeks, the Big Girl bottomed twice.

“I want you to believe in yourself because I do. Now sashay away,” RuPaul says. But before she sashayed, she did her signature Big Girl split one last time. Thankfully, we don’t have to suffer through that teeth-rattling experience again.