No one wants a cherry pie that bites back. Or a drag queen, for that matter. Episode 2 of “RuPaul’s Drag Race” put the girls on the stage and street to work for their money.

The results, surprisingly, showed that not all drag queens can dance nor are they all well versed in coaxing dollars from strangers. In other words, “Starbootylicious” – the theme for Monday’s show – broke some stereotypes. It also did as much to reinforce others — mostly the ones about drag queens being bitchy, catty and treating one another like shit. 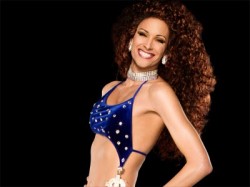 The episode opens with a quick challenge for the girls, working in teams, to makeover a RuPaul Supermodel doll and make it trashy. As in hooker trashy. So the queens mostly nail this one.

There’s the requisite cameo by two well-muscled black guys who roll out the fabric and accessories to slut up the Supermodel dolls. Last week, the men were shirtless beside a large black cannon. Mmk. This week, they packed their goods into orange trunks. Really, this part of the show passes by too quickly.

Nicole Paige Brooks from Atlanta Georgia (NPBFAG) (top photo) and Atlanta gal pal Sonique work together on the quick challenge and style their doll after Atlanta dragster Shawna Brooks. Props to the queens in the ATL.

Sadly, the shout out and Atlanta solidarity did little for their doll. Pandora and Sahara won the challenge with their remake, Shafreeforal. The name alone makes it work. 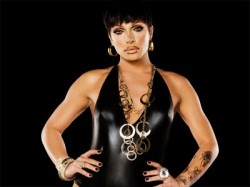 Our favorite quips from this week:

“A diva is a female version of a hustler.” (RuPaul)

“There was a lot of vagina in my face.” (Tatianna)

“I am a bad girl, not a bad slut. I think pole dancing is a little whorish.” (Tyra)

“We’re pretty girls and we’re going to sell sex. Isn’t that the name of the game?” (Pandora)

“I felt like a two-dollar whore and my grandmother is going to kill me.” (Mystique)

“That girl [Mystique] will eat Beyoncé in one swallow.” (RuPaul)

And now comes the good part: No sooner did the main challenge start than Raven started pecking at NPBFAG, providing a hint at the undertone this week.

The girls competed individually and in two teams as burlesque dancers. While one team danced, the other worked the street outside selling gift certificates for cherry pies or something. It was one of the show’s many, many product placements and commercial plugs – even the burlesque pole was sponsored! – that are growing oh so tiresome after just two episodes. I won’t be surprised if RuPaul hits the stage one week with an outfit adorned with sponsor logos, ripping a page from NASCAR drivers and their flame-retardant yet corporate logo-reinforced one-piece jumpsuits.

The sniping started early and came often this week. Much of it was aimed at NPBFAG and leveled by Raven (middle photo), a prelude to the Lip Synch For Your Life segment at the end that kept one from getting kicked off. “Nicole was picked last because this is a sexy contest and she’s not sexy,” Raven says as the teams are selected. 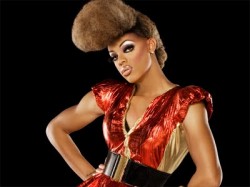 Another chunk was delivered by Tyra (bottom photo), who bitched about the team selection, bitched about the fabric for the team costumes, took a nap mid-challenge and was standoffish during burlesque rehearsal. “Can I say something, Team Captain? This red fabric that you chose – it’s shit,” Tyra offers.

Surprisingly, her ass was not kicked back to Orlando this week. But don’t be surprised when it finally happens.

Back to NPBFAG. She was awful on stage and struggled with the choreography. Her solo turned out flat, too. The charisma that carries her through performances in Atlanta didn’t make the trip to Los Angeles for the show.

She wasn’t the only queen who fell flat this week, though. Several performed poorly and it really made us second-guess our theory that dance skills were a job requirement for drag performers. Even more painful was watching Mystique perform her Big Girl Crash Landing Split again this week. She’s a one trick girl and it’s helped carry her through two episodes.

Team Sahara won and NPBFAG, Sonique and Raven were among the girls on the losing squad. No one was spared by the judges, except for Morgan as she won last week and enjoyed immunity.

Sonique turned on the crowd with her body but got knocked for being a bitch on the street. “No wants a cherry pie that bites back,” RuPaul tells her.

And with NPBFAG bringing in the least amount of cash, followed by Raven, the two faced off to not get kicked off. See how nicely that catty talk earlier in the show led up to this? Foreshadow, girl.

“I was surprised I was the lowest earner of tips,” NPBFAG laments. “I thought my exuberance on the street would have pulled me out of the bottom.” Not quite.

And when it came time to save themselves from elimination, NPBFAG fell flat – again. Raven worked every inch of the runway while NPBFAG seemed hesitant and lacked energy. It was easy to see what was coming next.

“You are a fabulous queen,” former Atlantan RuPaul tells NPBFAG. “I send you home to carry on the fine tradition of Atlanta queens that have come before you. Now sashay away.”