‘Drag Race’ queens come to Atlanta ‘For the Cure’ 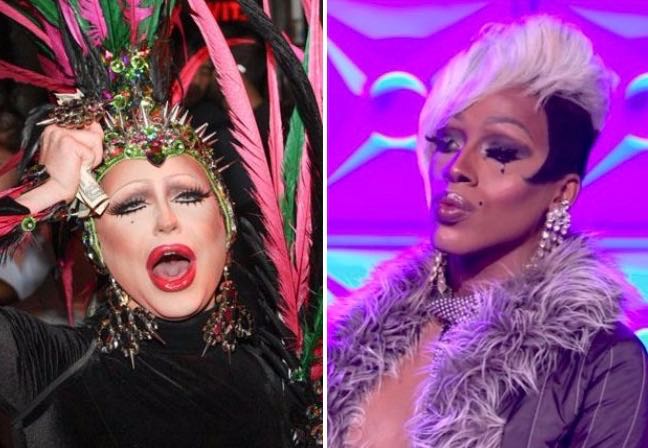 Queens spanning the run of “RuPaul’s Drag Race” – from Season 1 winner BeBe Zahara Benet to current stars Valentina and Atlantan Nina Bo’Nina Brown – are coming together for Queens for the Cure Tour 2. The seven-city tour – which also features “Drag Race” All-Stars Alyssa Edwards, Coco Montrese, and Atlanta’s own Phoenix – stops at Jungle on Sunday for an eclectic night of entertainment.

Queens for the Cure is more than just a drag show. It’s a benefit that raises funds for Until There’s a Cure as well as local charities in each city. The Atlanta show benefits AID Atlanta.

Before the queens make their way to Atlanta, we caught up with Phoenix to talk about what to expect, how she feels about being part of the show’s legacy, and her reaction to comments Brown has made about the Atlanta drag scene during her run on Season 9 of “Drag Race.” (We also reached out to Brown, who dished with us in March, but didn't hear back.)

Tell me a little bit about what this tour’s about?

Basically, in each city, we’re representing a different charity. [In Atlanta,] the one I know about is AID Atlanta. It’s put on by Pardon Moi French, and this is the second round of it. I believe it’s seven stops, and Atlanta’s one of them. It’s going to be at Jungle.

What can attendees expect?

It’s definitely a variety of different queens. Everybody has a different style, if you know what I mean. So it’s going to be an entertainment-packed show, and who doesn’t like to raise some money for charity while watching some great drag?

You competed on Season 3 in 2011. What is it like now, seeing how big the show’s become being part of this huge legacy?

It is, of course, amazing to be a part of it. I just posted a status on my social media not long ago, talking about how it’s so different now. You know, I would love to go back on it and represent the person and queen that I am today. I don’t even watch my season because I don’t know that person, you know what I mean? I’m completely different as an artist and as a person. The girls now – it’s such a worldwide phenomenon now. And when I was on in Season 3, it was popular but it definitely was not what it is now.

What do you think of the current season?

I love it. There’s definitely a variety of people on it, which is – you have to have it. I’m friends with Trinity Taylor, so I’m of course rooting for her. I’ve known Trinity for several years now. And she’s liable to win. But it’s definitely entertaining.

Throughout the current season, Nina Bo’Nina Brown has criticized Atlanta’s drag scene. Any thoughts about what she’s said?

(Laughs) I have some thoughts. Let’s see… I was a little… I haven’t spoken much about it. We all have our opinion on things, you know. I can say, as someone that books most of the – you know, there’s really only one or two spots that I don’t have my hands in as far as the drag goes, and I felt disappointed, and I was a little aggravated, because I did reach out to Nina, congratulating her on making it onto “Drag Race,” and making sure she had my number in case she had any questions. You know, I’ve been through this, if you have any questions, anything like that. I have messages where we have talked and she’s thanked me for being, in her words, “a real bitch” and believing in her. So I have had that communication with her in the past. Do I know Nina? No. We may live in the same city, but I don’t think she’s really tried to put herself out there the way that she thinks she has. And that’s no shade – we all have different ideas of what we’re doing.

For me, as the one who books the shows – Atlanta’s a big drag city, and when I’ve got a hundred girls trying to work, it’s really kind of hard for me to keep track of every single person, unless you are in my face, like, “I want to work.” I can say that she’s not been in my face saying, “I want to work.” I was a little frustrated, because Atlanta’s a city that I love so much, and I love the many variations of drag that come through Atlanta and that are in Atlanta. So when I hear it getting attacked, it’s upsetting. And I had people attacking me on my social media. I’d post a random photo, and people would comment on it, “Stop being a bitch to Nina!” And I’m like, “I haven’t spoken to Nina in forever! I’m not being a bitch to Nina!” It was a little frustrating, especially because she could have hopped on social media and been like, “Hey guys, I was in my moment, let me explain some things.” But it was never done. And once again, we all handle things differently. I handle things a certain way, and it’s all her prerogative. Once again, I don’t know Nina. Nina did one of my contests, Dragnificent, a few seasons ago, and that was our main interaction.

Beyond Queens for the Cure, what all are you up to these days?

I’m the entertainment director for Jungle and Burkhart’s, so if you see drag at one of those venues, my hands are in it in some way. And then, other venues around town, they come to me for advice on things. I also just started my meetings for the Starlight Cabaret, which is a legendary drag show that closes out Pride. I’m the entertainment coordinator for South Carolina Pride. I’ve got my hands in a lot, you know, and I kind of keep my hands in a lot because I love the art of drag, especially Southern drag. It’s just very different. I want to make sure that, as long as I’m in it, it stays alive with some of the legends, like Charlie Brown, who’s a big inspiration for me.

What else would you like to say to our readers?

Queens for the Cure Tour 2 stops at Jungle on May 21.