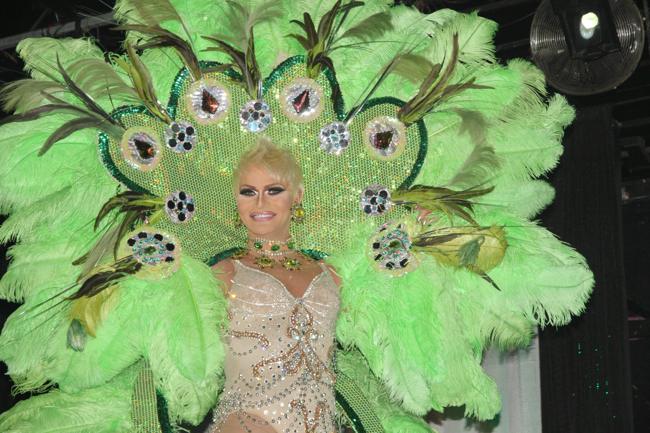 Gay Atlanta's drag community is rallying for longtime performer Ashley Kruiz, who remains hospitalized in intensive care as she battles pneumonia. Drag queens including Phoenix and Nicole Paige Brooks are collecting donations for Kruiz (photo) at their shows this week to help pay for mounting medical bills and her personal expenses. Kruiz, who once performed with Atlanta legend Charlie Brown at her cabaret at Backstreet, is now the show director at Burkhart's. Kruiz has been battling health issues for a few weeks, but they took a turn for the worse earlier this week. She's been hospitalized at Grady's Intensive Care Unit since at least Monday. Friends say she's suffering from a lung infection and two types of pneumonia. Phoenix asked her Facebook fans on Tuesday to help Kruiz:

Im sure by now everyone in the city of Atlanta and across the country has heard about the legendary and one of the most influential queens in the biz, Ashley Kruiz. All of MY shows, along with other shows from around the city will be collecting donations during and/or at the end of the show for Miss Kruiz. She is in ICU and we are trying to stay positive about the situation, but of course its too soon to know much more.... All donations are greatly appreciated and will go directly to Ashley for what ever the situation calls for..Every cent will help and make difference. Getting her health together will be her main concern WHEN she pulls through this trying time... I know collections are being made tonight @ Jungle for "Ruby's Tuesdays", tomorrow @ Jungle for "Dragamaniacs", Thursday @ Burkharts for "Dancefloor DIvas" and im pretty sure through out the weekend @ Burkharts. Please continue with the thoughts and prayers, those are needed more than anything right now. Thanks so much.

Just off the phone with Kasey, Ashley is still in ICU, he has2 types of Pneumonia, so PLEASE send a prayer his way. tks

Brooks says she visited Kruiz on Tuesday and will be collecting donations for her during Dragamaniacs on Wednesday at Jungle.

Just got back from seeing Ashley Kruiz please keep sending love and prayers her way.

One of the legends of Atlanta Ashley Kruiz is in ICU and not well tonight. Please join me and Ashley's friends and family by sending positive energy and kind thoughts her way. Ashley Kruiz was one of the entertainers at the legendary Charlie Brown's X Rated Cabaret at Backstreet Atlanta when I first moved to Atlanta in the 1990's. I love Ashley and hope she is well and back to herself soon.

The outpouring of support for Kruiz is similar to how she helped drag legend Lily White, who suffered a heart attack last year after a fire burned down her home. Kruiz was one of several drag queens who performed at a benefit for White in March 2012. In 2010, Kruiz was among a long list of performers who performed in a going away show for Alexandria Martin. Kruiz has also performed at Backstreet reunion parties and took second runner-up in a revived Mr. David & Miss Originality Pageants in November 2011. On Wednesday, Burkhart's asked its patrons to make a donation to help Kruiz.

Throughout the coming weeks we will have opportunities during our shows for the community to make donations for personal and medical expenses. Ashley has given much to the community and this is our chance to give back. Tomorrow night, Phoenix will begin collecting donations throughout her show, beginning at 11:30PM. Angelica D'Paige and Shavonna B. Brooks will follow suit during their shows beginning at 11PM on Friday and Saturday. Please keep Ashley in your thoughts and prayers during this difficult time. Thank you for your support.

UPDATE: Donations to help Kruiz can be made via PayPal to [email protected], the email address of Kruiz's close friend and roommate.