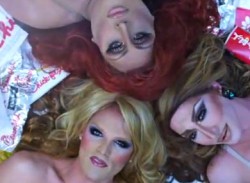 Monday was a big day for Willam Belli. Even as his drag slam of Chick-fil-A to Wilson Phillips’ “Hold On” went viral, he was the subject of the most surprising “RuPaul’s Drag Race” ever. With “Drag Race” contestant Belli as Chynna Phillips and drag sisters Detox and Vicki Vox as Wendy and Carnie Wilson (photo and video), the faux commercial slams Atlanta’s anti-gay chicken chain while also pointing out that some gays love to hate -- and hate to love -- Chick-fil-A. "Someday somebody’s gonna make you want to gobble up a waffle fry/ Even though Chick-fil-A says you’ll make the baby jesus cry... So chow down on Chick-fil-A/ Even if you’re gay." As a “Drag Race” contestant,” Belli knows a thing or two about love-hate. He spent the day talking up the video with the Advocate and Out, among others. SPOILER ALERT: What reporters didn’t know was that they should be asking Belli the question everyone else was after his shocking “Drag Race” elimination on Monday for breaking an unstated rule: What did Willam do? Belli's still playing coy. But she did puke during the elimination.