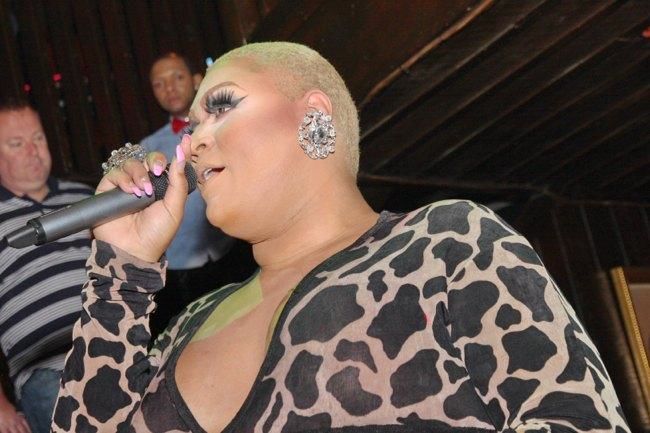 Shopping cart racer and helping hand drag queen Shavonna Brooks has this advice for aspiring queens: Don't stuff your 420 into a grinder, throw it in your luggage and check it at the Atlanta airport. You might get arrested like her.

Brooks, who hosts Extravaganza on Saturdays at Burkhart's, is opening up about her arrest last year at gay ghetto-fabulous Hartsfield-Jackson Atlanta International Airport. First, with a July 30 Facebook post. On Monday, with a Fenuxe interview.

But none of that mattered to Brooks as she sat on the airplane waiting for the police to find her. “This was completely my fault. I’ve traveled with [marijuana] for years. This one particular time, I put it inside a grinder and stuck it in with some bracelets. Stupid mistake. I know they check jewelry because it shows up like foil,” Brooks confessed.

Brooks immediately packed her things before the police got to her seat. She sat collected, calm and ready to face what stood before her. With no delay the police escorted her off of the plane and began to question her. “It was like a movie,” Books said.

Now, she's using the arrest as motivation to change her life.

“I wouldn’t have done anything differently. God has a way of doing everything in your life when you’re a believer. This was supposed to happen,” Brooks remarked. And her words aren’t ringing hollow. She’s turning her life around and getting sober. “I’m very proud of myself having smoked almost every day since the age of 16. I’m not messing this up. Any addiction in life can be overcome. It takes strength and belief in yourself and you can make that change. In my case I was forced. But it was what I needed in order to have a better chance at life. I’m ready to take on this new opportunity,” Brooks said.

Since late July, she's been chronicling her cannabis-free days on Facebook.

Lemme tell you a story:

Last year, I made a bad choice and suffered the consequences. I was arrested on United Airlines for possession of marijuana in my checked luggage. (Faith Evans move). I waited over a yr to be issued a court date, which came after I moved. Missed the court date, and the judge sent the sheriff's after me. Spoke with the sherriff, which was a nice man. He gave me a week to get bond money(1, 045 coins)... very sweet of him. I made the money, went to the bails bond company before I turned myself in, only to find out, just like I, they received nothing pertaining to my case. THEY RESET MY COURT DATE! No money had to be paid.

When I made it to court, the judge said Ms McGill, you have 1yr probation under the conditions of no alcohol/drugs, 40hrs community service, and to attend a substance abuse course! Did NOT red flag me from flying or make me have to report monthly.

Met with my probation officer this morning after getting lost yesterday, and we connected instantly. She asked if I did drag, after seeing my occupation. Expressed how she had been dying to see a drag show! Proceeded to Give me permission to continue to travel this great nation. Called me this evening, and Now she and her colleagues of Clayton county will be in attendance at my show this Saturday!

God! NOBODY BUT YOU!

Keeping the faith
The Empress

Wish me luck today yall! I go for my drug and alcohol evaluation this morning, and hopefully this will be my last day having to report to probation this afternoon.

Clayton County is really messing with my life right now. I've been on the right track following through with everything I was told to do, and that obviously isn't good enough for them.

I'M ASKING THAT ALL RIGHTEOUS PEOPLE OF GOD TO SAY A PRAYER FOR ME TODAY, TONIGHT, TOMORROW! For the prayers of the RIGHTEOUS availeth much. So I need my Saints and Prayer warriors to join in with my Lawyer, and help me to FIGHT ON!

God Bless you all

The other lesson she gleaned from the arrest? Even cops need tips on picking the perfect shoes.

In handcuffs she was put into the police car and they made their way to booking. “I talked to the officers the whole way down Tara Boulevard. The female officer was asking where I bought the shoes I had on because she wore a size 12 in women’s,” Brooks remembered

And don't forget the wigs!

“The arresting officers were so nice. I asked that they get my bag with my wigs from underneath the plane and not make me walk through the airport being a public figure and knowing a lot of flight attendants. They honored my request and sent a car to the ramp,” Brooks said.

Other drag queen advice? Don't stow your pot in the car after a show either, Tyra Sanchez. And stop sucking cock, especially in airport restrooms.