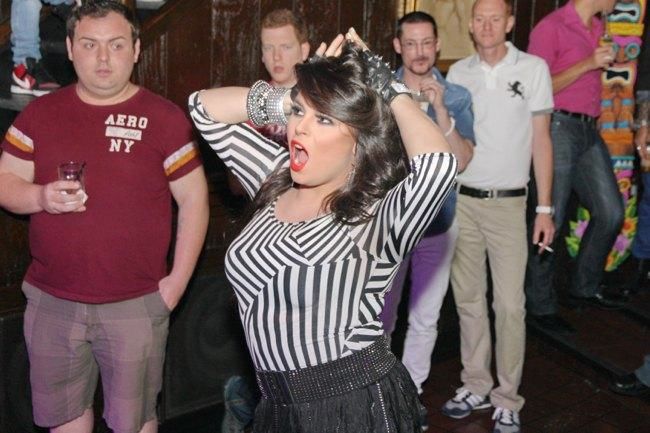 Atlanta drag performer Alissah Brooks says she was denied entry by a Buford Highway restaurant early on Friday for being transgender when she and two friends tried to dine there.

The friends, drag performers Mariah Paris Balenciaga and Y'Marie Santiago, then confronted the security team and manager who they say wouldn't allow Brooks (photo) into Don Pollo Bar & Grill on Corporate Boulevard just off Buford Highway. They recorded the interaction and posted it Friday on YouTube. In the video below, a restaurant employee says Don Pollo can deny service to anyone it chooses.

The stop at the restaurant came after Brooks joined a GLAAD Atlanta reception on Thursday and then performed with the Dancefloor Divas at Burkhart's. She described what happened in a Facebook post on Friday:

Last night at about 3:30am I and two friends decided to go to "Don Pollo" on Buford hwy in Atlanta GA. I was refused entry because of me being transgender. The security/management said "you cant come in because you are a man." I've traveled just about everywhere in this country. I have even entered the most straightest places many would steer clear from and I have never been turned down to enter an establishment. Unfortunately I was last night. Be the change you wish to see in the world.

Brooks tells Project Q Atlanta that she went public about the incident to raise awareness.

"My reaction is simply just surprised," she says. "Like I said in my post I've never had this happen. So it feels awkward. Feel a little less than. As for what's next? I'm just spreading the word so everyone is aware. I'm involved with GLAAD and my best friend Kat Graham is helping share the story and just make everyone aware of the situation. I'm not seeking a lawsuit. Just awareness. Hopefully an apology and maybe they can be more sensitive to other girls like myself."

Balenciaga also spoke out about the incident:

I have just experienced something that reinforces my opinion........ "There is much work to be done !"

Myself and a Friend , that happens to be a beautiful transsexual woman, were denied entry to a business because she was Transgender!

Trust me when I say , I don't tolerate discrimination of any kind !!!!!! Exploring legal and public actions ...... Consulting my resources
#mug4dayz
#equalrights
#mugzilla
#fightBullshit

Last night I went out with Mariah Paris Balenciaga and another friend to an establishment called "Don Pollo"...my beautiful transgendered friend Alissah Brooks was denied entrance into the establishment because she is a "MAN" according to management/security...I can not believe that she had to deal with this but we need to spread this awareness and show our community!!! Roll the clip!!!

A call to the restaurant by Project Q on Friday afternoon went unanswered.