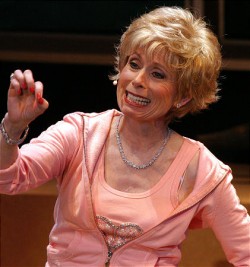 Radio talk maven Dr. Laura Schlessinger, who in recent years seemed to soften her anti-gay tirades, is giving up her show at year’s end, leaving her audience on Atlanta’s WCFO 1160 AM without their daily dose of righteous indignation.

What finally drove her from the air? Her use of a racial slur 11 times with a caller last week. In other words, the G-word won’t getcha, but the N-word will.

Schlessinger whined to CNN’s Larry King Tuesday that although she won’t renew her radio contract when it expires at the end of the year, she’s not retiring or quitting. Instead, she wants to “regain her First Amendment rights.”

“I want to be able to say what’s on my mind and in my heart and what I think is helpful and useful without somebody getting angry — some special interest group deciding this is a time to silence a voice of dissent and attack affiliates and sponsors,” she said.

Her anti-gay tirades cost her a television show in 2000 when she called homosexuality a “biological error” and added that “a huge portion of the male homosexual populace is predatory on young boys.”

But last year she praised same-sex committed relationships as “a beautiful thing and a healthy thing.” Nevertheless, the Gay & Lesbian Alliance Against Defamation joined with other progressive groups to condemn Dr. Laura on Monday and threaten her advertisers. Now, they are applauding her radio departure.

“Last week were all reminded of ‘Dr. Laura’s’ propensity to use vile words and demean entire communities,” Rashad Robinson, GLAAD’s senior director of media programs, says in a prepared statement. “It doesn’t matter how quickly she apologizes, if she doesn’t learn that using her media platform to promote ugly and vulgar language and rhetoric contributes to putting people in harm’s way.”

But Dr. Laura’s national audience of more than nine million weekly listeners puts her in the Top 5, on par with virulently anti-gay Michael Savage (who airs locally on WSB 750 AM) and Rush Limbaugh (who airs locally on WGST 640 AM), who’s no friend to LGBT issues even if he does buy some time with singing sellout Elton John.

Once she’s out of the daily radio grind, maybe Dr. Laura will return to the Big Screen. She seems to like it there.