Downsizing: No time? No money? No problem.

“I feel obligated to open with an apology to anyone offended by the sight of me in my underpants. I made a commitment, and I intend to see it through. Unfortunately for me, it begins with an act of public humiliation.” 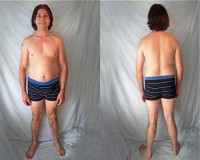 I feel obligated to open with an apology to anyone offended by the sight of me in my underpants. If it’s any consolation, you can’t possibly find it as offensive as I do. I didn’t really begin to question the wisdom of it all until I was actually standing in my skivvies, waiting for the photographer to adjust a light.

He did this in order for people to see my body better. In that moment, I thought, “Is that something we really should be encouraging?” But I made a commitment, and I intend to see it through. Unfortunately for me, that commitment begins with an act of public humiliation.

This requires a little backstory.

It all started because our beagle, Daisy, has allergies. We had to weigh her to determine the correct dosage for her antihistamine, which you can do by standing on the scale holding the dog, then just you, and subtracting the difference.

I avoid the bathroom scale like I avoid Kate Hudson movies. There’s simply nothing there I wish to see. In the past, whenever I was asked for my stats by a doctor, or the DMV, or Manhunt, I would always list 180 pounds. That was my weight the last time I inquired and was actually happy with the answer. I can’t recall precisely when that was, but I remember gas was $1.25 a gallon.

All of this to say, I was completely unprepared when the scale informed me that together, Daisy and I weigh 245 pounds. This was alarming. My poor beagle weighs 65 pounds.

Alright, fine. She weighs 32. The rest was me. I double-checked.

Truth be told, I already knew. My jeans did not shrink when I washed them. Eating five meals a week from the Dollar Menu while sitting in traffic has its consequences. My friends tell me I “carry weight well.” Nobody says that to fit people. They say it to fat people. They might also compliment your nice face or pretty hair. When you think of Ryan Reynolds, you don’t think of his damn hair.

MY BODY, MY ENEMY

I battled cancer for most of my 20s. My body became my rival—something to be fought as I attempted to regain control and keep living. A lot of people who’ve faced chronic illness have told me the same thing.

Your expectations shift. You ask your body to perform the business of the day, be reasonably alert, and stay alive. In exchange, you don’t ask for much more.

An odd imbalance has emerged: While I continue to challenge my mind and spirit to grow, to try and become better every day, my body gets a free pass. I’m not crazy about the way I look, but I’m happy to be alive, so we call it even and I don’t think about it.

Alright. That’s a big lie. I actually really, really dislike the way I look. I think about it a lot. I do not attend pool parties or go to the beach. I layer clothing, even in July. I don’t think I’m hideous, and I don’t think I’m obese. But I’m embarrassed by my appearance.

The body I’m living in looks… neglected. Like a moderately-priced house in need of repairs. I feel like I’m living in a fixer-upper, but doing none of the fixing up. How could I? Doing so would require time and money, and I don’t really have either to spare.

I set out to find a way.

THE PLAN
Here are the facts: I don’t have the money to join a gym, or pay for ongoing personal training. I work a desk job that requires me to be seated for eight hours a day, followed by my own writing at home, also at a desk. And it’s a lot cheaper and more convenient to eat crap than it is to eat something healthy. I know a McDouble barely qualifies as food. But it’s a dollar, people.

I approached certified personal trainer Kevin Deloach with these constraints, and asked him to craft an at-home workout and nutrition regimen for people with no time, and no money. He assured me that was totally doable.

So if this sounds like you, hop on board. For the next six months, we’re gonna commit to looking and feeling better in our own skin. I won’t ask you to do anything I’m not doing, or eat anything I’m not eating.

You can trust Kevin, because in addition to being very good at his job, he also used to be a real big fat person. And you can trust me, because at the end of six months, I’m going to work the runway in a swimsuit at Atlanta Executive Network’s Swim 2011 in May.

It will either be a moment of personal triumph or utter and complete disgrace. It could possibly be both. But the gauntlet filled with mac and cheese has officially been thrown down. That’s why I was willing to pose for the photo: I intend for it to be the worst picture of me we’ll ever see.

The Downsized columns following my progress start on Friday, with updates every week here on Project Q. 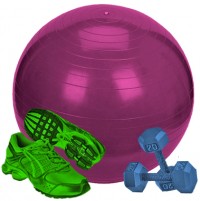 Athletic shoes. Real, honest-to-god sneakers, the ones that would never go with an outfit because they’re not supposed to. You want something lightweight, durable, and moderately cushy to give you support.

Exercise ball. Can be found at big-box discount stores for about $20. They make ’em with sand in the bottom as well, for increased stability, which I really like. I don’t know if the sand really helps or not, but it makes me feel better, and that’s enough for me. The ball will prevent you from putting strain on your neck and back. It also takes up a lot of space, making exercise harder to ignore.

Dumbbells. If you’ve got the cash to burn, you can buy a set of adjustable dumbbells, which allows you to fluctuate the weight for each exercise, and increase as you improve. But for our purposes, we’re just going with one pair of one weight, which you can find pretty cheap. For men, that’s likely to be 10-15 pounds to start, and for women, 5-10 pounds. When picking out the right weight for you, try a set of bicep curls (video).

Don’t worry about what the other people in Wal-Mart think of you while doing this. The people judging you have a cart full of marshmallow fluff and Pringles, and life has its own plans for them.

WHERE TO BUY
Check the big-box stores, or Play It Again Sports. Also: Craig’s List. There are plenty of people looking to ditch dumbbells they’ve outgrown, or equipment they got last New Year’s that now just serves as a shameful reminder of dreams unfulfilled. You owe it to them to get this out of their house. Stop their suffering.

Topher Payne is an Atlanta-based playwright, columnist and author. His latest play “Tokens of Affection” opens in January at Georgia Ensemble Theatre. His “Domestically Disturbed” column can be found in each issue of The GA Voice. He makes his modeling debut in six months. Questions? Email him and visit his website.