Downsizing: Joan Crawford says get off your ass

READ MORE | Catch up on all of the Downsizing fitness columns

Yeah, yeah, yeah. I know I missed a week. Even though I didn’t manage to write about the workouts, I still managed to get them done. But it took a little creativity. Which brings us to this week’s topic: Time Management.

Workout Number Two is now online. You can download the printable checklist, and the instructional video is below. This one’s all about your biceps and back, and it will also help you build stamina for when you keep your legs in the air for extended periods of time. And come on, that’s bound to come in handy eventually.

A reporter once asked Joan Crawford (top photo) how she found the time to write hundreds of letters a week. She famously replied, “You don’t find time, you make time.” I’m sure someone in history had said that before Joan Crawford, but I prefer to attribute it to her. Joan was full of great quotes: “If you want the girl next door, go next door,” “I need sex for a clear complexion, but I’d rather do it for love,” and “Christina, go scrub the driveway with your toothbrush,” are all personal favorites. But I digress.

My point is, Joan was absolutely right about the issue of time management. By the third time you do one of the four workouts in the Downsizing plan, you should be able to complete it in 30 minutes. I know this for a fact, because when I complained to Kevin about how long they were taking to finish, he brought me back in his studio (second photo) and timed me. Sure enough, once I cut out the sections of the workout where I spent 10 minutes picking out a song on my iPod or lying on the floor sobbing, I actually wrapped up the workout in half an hour.

ANY TIME, ANY PLACE, ANYWHERE

Full disclosure: Trying to find 30 minutes a day, every other day, has been really tricky. I get up in the morning, go to work, and then go directly to the theater, meaning I’m actively booked from 8 a.m. to 11 p.m. There’s no way I’m getting up earlier, and even if I stay up late, I’m not really looking to do bicep curls after midnight. Also, the dog is scared of my fitness ball, so I can’t do that stuff with her in the room or she attacks me.

I put my free weights in the car. So far, I’ve done modified versions of Workouts One and Two in the following locations: My boss’s office, a wig designer’s dining room, and the Reading Room of the Roswell Cultural Heritage Library. Basically any spot with six feet of open space will do. You’ll note that I said “modified workouts.” If I don’t have the ball, there’s some parts of the routine I can’t do. But doing 6 out of 10 steps is far better than doing none, which would be the alternative.

And to answer your thought, yes, I probably do look like a crazy person. But think of it this way: I used to laugh at the guys who’d breeze by Outwrite Bookstore on their bikes, clad in fluorescent spandex from head to toe, panting on the corner of Piedmont and 10th. The only thing in my mind more embarrassing than gasping for air on a public thoroughfare would be doing so while dressed like a dollar store action figure (a la Jake Gyllenhaal, third photo).

Then I had the good fortune to see one of those guys naked. I never laughed at them again. Bike on, Spandex Man. Keep up the good work. 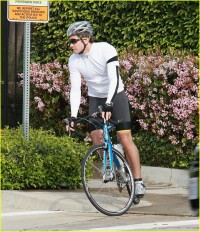 I don’t expect you to start working your triceps during church, particularly if you go to Eddie Long’s church. No need to taunt the man. I may be the guinea pig here, but you’re not expected to follow my example to the letter. I’m the idiot who’s five months away from working the runway in a swimsuit, so I’m gonna be pushing the limits of sanity until I see solid results.

But you can work within the spirit of the idea, and do what you can, when you can. Work a desk job? Why not keep the weights under your desk and bang out a few sets on your lunch break? Do you never miss an episode of “Glee?” Crunch your way through commercials. Your best opportunity might be in a semi-public location. People may see you, but what they’ll see is someone who’s committed to their health, and their future. And at least you’re not in head-to-toe spandex.

You cannot let bashfulness or body issues prevent you from taking ownership of this journey. Of course you have body issues. I do too. That’s why we’re doing this. Vanity plays a role, but it isn’t the star of this neurosis extravaganza. That honor goes to your health. And the better you are to your body, the better you’ll feel about you.

So if you haven’t done anything yet, or you haven’t been consistent, watch Workout Two below. Try to do at least one set of each exercise. But if you only get through half, congratulate yourself on the job well done, and then try again in two days. If you say you’ll find the time, you won’t. Make the time. Your health deserves to be on your calendar. Think of how proud Joan Crawford would be. And while we’re following her example, I’d like to try that regimen she mentioned for a good complexion.

Topher Payne is an Atlanta-based playwright, columnist and author. His latest play “Tokens of Affection” opens in January at Georgia Ensemble Theatre. His “Domestically Disturbed” column can be found in each issue of The GA Voice. He makes his modeling debut in six months. Questions? Email him.

For all the Downsizing videos, a diary and more tidbits, visit his Downsizing on Project Q page, become a fan of the column on Facebook, or catch up on all of his Project Q Atlanta Downsizing columns.