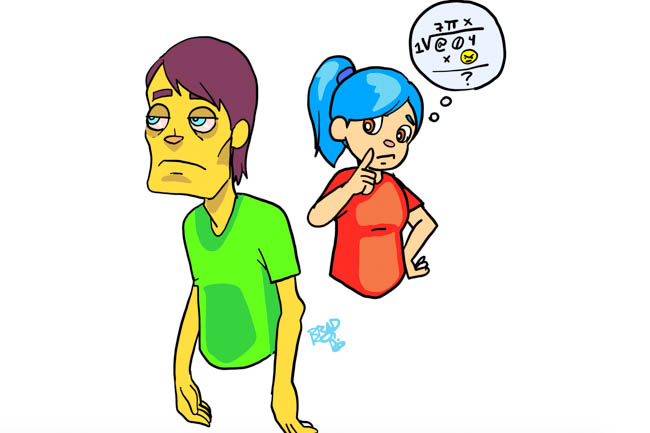 When a friend’s possible drug use moves past indulgence into excess, sort your own expectations and obligations before “helping.”

I think my friend might be abusing drugs. Before I even start, let me say that I dabble recreationally, so I’m not judging partying with substances per se.

At first, I just thought he was being weird or going through something that made him act differently. He goes manic on occasion. He accuses good friends of “betrayal” and other paranoia. Not everybody is affected the same way by the same drugs, so I chalked it up to him just doing too much.

Lately, he upped the ante. He’s losing weight, and not in a good way. His eyes are sunken and dark, his skin is yellow, and his accusations have blown up into full-on thinking everyone is out to get him. He grinds his teeth obviously and constantly.

I know all of these can be signs of prolonged meth use. But maybe it’s just some unknown emotional drama that has him not being himself?

This is the first guy I met when I moved here, and I care about him, but I also know I don’t have much room to talk when it comes to indulging. Should I confront him?

Your concern is probably more common than many of us like to talk about. Gay men and meth are a well-documented duo.

While we each choose whether to indulge in chemical escapism and risk the consequences as individuals, that doesn’t mean you can’t see the signs of going overboard. In fact, you could be more qualified to tell if someone else is over-indulging and losing their way.

Be careful, though. What if the signs mean that your friend’s health is at risk from an undiagnosed illness? What if he, as you hint, might be going through something that is stressing him out so much that he’s letting his self-care and appearance go?

As a friend, you can’t confront him about drugs if you don’t know it for a fact. If you do, you could cause damage with the assumption before you have a chance to help.

Since you are close, you can approach your friend, and it may take more than one conversation. Ask if there’s anything he wants to talk about. Tell him you sense a possible problem and are concerned because he seems different.

List the signs you are reading. If he avoids it, tell him you’re there for him if he changes his mind or anything comes up. This opens the door for him to come to you, and for you to circle back and broach it again a little later.

If he’s not ready to confide in you, that doesn’t mean your friendship has to be over. The line between being supportive and pushy is a fine one, and it’s hard to navigate by its nature. Use your best instincts.

Of course, the symptoms you name could be signs of and addiction and abuse, so be ready for that to be the issue. If your friend confides that this is his situation, or if you find direct evidence of such, step in again and encourage professional help. You can support him, but you can’t fix him. Leave that to the professionals.

Q Advice is for entertainment, not counseling. Send your Qs to [email protected].

Pick it up each week at LGBTQ and allied venues, and find new content here every day.