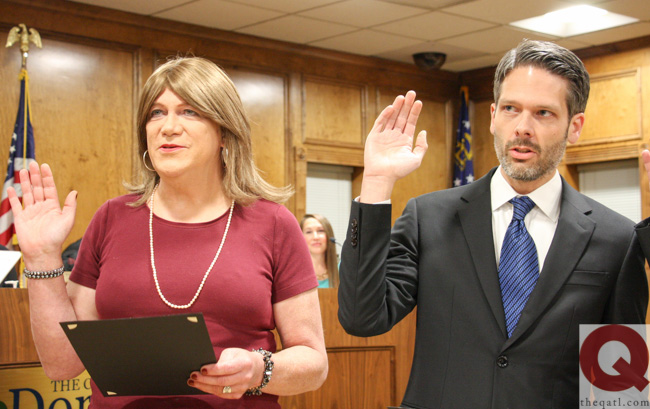 Joseph Geierman and Stephe Koontz helped Doraville make history on Thursday, giving the City Council two LGBT members for the first time and swearing in the only openly transgender elected official in Georgia.

The pair won election to the seven-person City Council in November. On Thursday, Municipal Court Judge Scott Carter administered the oath of office to Geierman, Koontz and returning Council member Robert Patrick during a brief ceremony at Doraville City Hall.

“What a wonderful moment of occasion,” Pittman said. “I've already told both of them you have to hit the road running because we've got a lot going on.”

Geierman, a gay longtime resident and civic activist in the DeKalb County city, won the District 2 post with a campaign platform focused on attracting more residents and businesses while also improving the city's zoning and permitting processes.

Koontz, who won the District 3 race by six votes, is a transgender retiree and former business owner and church administrator. Her campaign also focused on growing the city's population and businesses, improving code enforcement and improving the city's permitting process.

But their elections were also the high point of a campaign cycle that featured 16 LGBT candidates across metro Atlanta. Geierman and Koontz, along with new Hiawassee Mayor Liz Ordiales, were the only ones who won.

“The best thing about Stephe and I being elected is the fact that me being gay and her being trans weren't really campaign issues though this whole thing,” Geierman said.

“While there may have been people who voted for or against us on those particular issues, I think really much broader issues were the reasons that we won our respective races. To me, what that says is how much the world has changed since I first moved here in 2001 or since I was growing up in the '80s and '90s,” he added.

Their swearing in Thursday also means the return of an LGBT City Council member in Doraville for the first time since 2013. Koontz is also the council's first-ever transgender member and the only trans elected official in Georgia. In fact, she appears to be just the second transgender person elected to office in the state. Michelle Bruce was elected to the Riverdale City Council in 2003 but lost her re-election in 2007 during a campaign that included transphobic taunts from opponents.

Koontz applauded her city for its diversity.

“I'm excited that the city that I chose to live in is diverse enough and respects diversity enough to have elected me and that they didn't hold being transgender against me during the election,” Koontz said.

“This is a really exciting moment for our state and that the world is changing. This is a sign that even though we see the rhetoric from the right wing that LGBT people are evil and shouldn't have any rights, that there's enough people in the world that would vote for a transgender person to represent them. That's a really powerful thing,” she added.

Koontz said she also understands that as she takes office, she faces dual roles of representing her constituents in Doraville while also being a leader for transgender people across the state.

“But at the same time, I'm really interested in promoting LGBT rights and representing the transgender community in public office. I'm it. So there is a big responsibility on my part to behave ethically, professionally. People are going to be looking at me as, OK, here is a transgender person in office and this is what they behave like. I've got a lot more weight on me than any of the other five people sitting up here right now,” Koontz said.

A large crowd of supporters was on hand for the swearing in, including state Rep. Park Cannon, one of four LGBTQ state lawmakers, trans Latina activist Estrella Sanchez and representatives from Georgia Equality.