Don’t shed a tear for this gay bullying ‘victim’ 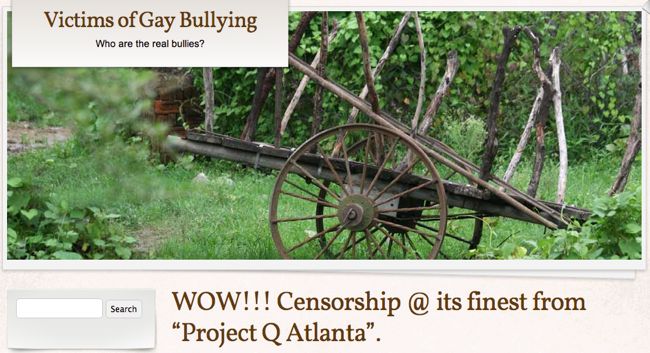 With the knack of being as offensive as he is ignorant, Joe Benning does deserve a bit of credit. He took his passion against LGBT equality and shaped it into a blog acting as a megaphone to turn the concept of gay bullying on its ear. Welcome to the world of online cranks, Joe. The Missouri guy introduced himself last week when he attempted to comment on a story I wrote for Project Q Atlanta, Midtown declares hideous war on ‘thugs in drag.’ It’s a post that had already prompted some name calling from a Reddit troll and Benning offered up his own commentary.

It would be much wiser for the queenie's to stay off the streets...esp where they are not wanted. Homosexuality and all its deviancy is like a cancer....it destroys all it touches.

How nice. It doesn’t really address the subject of the post, but it does say a whole lot about Benning. When his comment wasn’t posted, he tried again.

My posts can be moderated from now till hades freezes over. The truth cannot be hidden and censorship won't work either. Thanks and have have a wonderful day.

Sensing that I was on to another crank like this one from Cobb or this one with a seat in the Georgia legislature, I reached out to Benning to offer a bit of advice that his brand of anti-gay hate is a better fit for Fox News.

Save yourself the time and stop posting comments on Project Q Atlanta. They won't be published. You can take your hate, ignorance and anti-gay venom somewhere else.

With our bromance in full bloom, Benning offered a retort.

Sorry to hear that. I guess then the only people who have a right to say anything is the "kweers" as usual. Nice censorship package you got there Matt. But you try and have a nice day. Oh, and thanks for letting me know I'm not welcome. You just made my blog Victims of Gay Bullying. I do appreciate it greatly. I'm sure my readers will as well.

Wait, a blog? Yes, I took the bait and clicked. It’s where Benning attempts to take the concept of bullying – a serious issue that anti-gay folks use to drive LGBT people, often teens, to suicide – and make he and his ilk of ignorant bigots into the victims. Uh-huh, he’s claiming that LGBT activists are the ones bullying him and his supporters, trying to shout them down and censor their hate. How do I know? Benning’s post about our interaction, WOW!!! Censorship @ its finest from “Project Q Atlanta”.

I posted something on Project Q Atlanta’s ass wipe newspaper. The following is the email I got from them and my response. Was I nice? As must I could (which prob wasn’t much).

Get it? Benning’s the real bullying victim here, not the “kweers.”