“Then there was the time the Salvation Army caved to the religious right and rescinded domestic partner benefits for its gay employees. These are not nice people.” 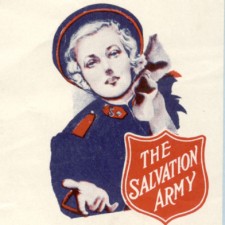 Editors’ note: Each year, gay journalists remind readers of the Salvation Army’s anti-gay policies that may dissuade donations to holiday drives. This column rounds up some of the reasons why.

The Salvation Army is a nasty anti-gay evangelical church. To wit:

The Bush administration is working with the nation’s largest charity, the Salvation Army, to make it easier for government-funded religious groups to discriminate against gay people in hiring, according to an internal Salvation Army document.

George Hood, a senior official with the Salvation Army, said the group never discriminates in delivering its services, but on the question of hiring gay employees, ‘it really begins to chew away at he theological fabric of who we are.”

And here are a few beauts from the Salvation Army’s various Web sites around the world that I pulled up a while back:

“Christians whose sexual orientation is primarily or exclusively same-sex are called upon to embrace celibacy as a way of life. There is no scriptural support for same-sex unions as equal to, or as an alternative to, heterosexual marriage.” – Salvation Army USA Web site, Dec. 2003

“[Homosexual activity is] as rebellion against God’s plan for the created order…. Homosexual practice, however, is, in the light of Scripture, clearly unacceptable. Such activity is chosen behaviour and is thus a matter of the will. It is therefore able to be directed or restrained in the same way heterosexual urges are controlled. Homosexual practice would render any person ineligible for full membership (soldiership) in the [Salvation] Army.” – Salvation Army Australia Web site

Then in Scotland, the Salvation Army actively lobbied against the repeal of anti-gay laws banning the “promotion” of homosexuality as a “pretended family relationship,” arguing that it would harm children:

We welcome your recognition that marriage is still the ideal context for raising children and your assurances regarding guidelines for teachers in recent discussion on the repeal of “Section 28”. However, we believe that by repealing this clause, the Scottish Executive will potentially be harming both children and the family unit.

We are concerned that we cannot predict the result of a repeal, and feel the floodgates could be opened, ultimately causing great hurt to both parents, teachers and our children. We are also very aware of the increasing pressures on young people to experiment with heterosexual sex at a younger age, without the additional pressure of self-questioning regarding homosexual sex.

As an international church and charity which supports and helps any person regardless of sex, race or religion, The Salvation Army believes that, contrary to the Executive’s view, the proposed repeal would increase discrimination and result in more bullying in our schools. We can easily envisage a situation where, due to active promotion of homosexuality in schools, children will grow up feeling alienated if they fail to conform.

Then there was the time that the Salvation Army caved to the religious right and rescinded domestic partner benefits for its gay employees.

These are not nice people.

Guest blogger John Aravosis is a Washington, DC-based writer and political consultant, as well as the editor of leading progressive political blog AMERICAblog and its companion AMERICAblog GAY. He is also an occasional TV pundit, with appearances on The O’Reilly Factor, Hardball, Nightline and CNN, among others.

Read this post in its original context here. Read other reactions to this year’s firestorm here.