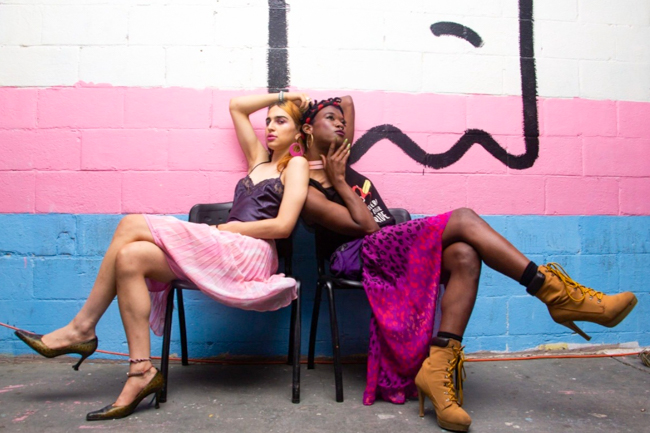 The ever-whirring minds at Southern Fried Queer Pride launched an effort to finance a community center by, for and about LGBTQ communities of color in Atlanta. In three days, they have some $16,000 and counting.

With a goal of $50,000 and six years of making things happen for its loyal and active constituency, a physical space was always part of the dream at SFQP. And the need is clear, said founder and organizer Taylor Alxndr.

“Far too often, queer spaces are not inclusive of black and brown folks,” Alxndr told Q. “We’re left out of the equation or mistreated, which leads to it being hard to find community.”

Even with some dedicated spaces for organizational meetings and a few startup efforts dotting the landscape in Atlanta, there is still no central place QTPOC to gather fellowship and camaraderie, they added.

“Atlanta doesn’t have a community space that’s accessible for folks to just be, exist, and thrive that’s fully open to the queer public,” Alxndr said.

So after years of successful events and actions, the GoFundMe campaign went live on Saturday and really gained momentum on Monday, going from about $2,000 to about $16,000 in 24 hours as of Tuesday at noon.

Organizers expect the $50,000 goal to be increased once its met, and the money is earmarked for the space itself, according to Alxndr.

“The end goal is to own the property that becomes the community space,” they said. “Often we see spaces disappear or get pushed out by developers because they don’t own their buildings or land. We want to make sure that what we create will be permanent and able to grow without fear of being pushed out.”

Below is the full text of the campaign pitch for donations. Photo via Southern Fried Queer Pride.

For six years, Southern Fried Queer Pride (SFQP) has built a community in the South amongst Black and brown queer and trans artists and organizers!

To date, we have organized a total of 7 festivals in Atlanta, GA and Durham, NC; convening over 60 performers, artists, and educators and 2,000 attendees from throughout the South. Annually, SFQP hosts over 60 events and actions, from marches and community conversations to gallery shows, stage productions, and more. SFQP uplifts Southern queer culture; a culture that is so often overlooked by mainstream media. The time has come for more.

SFQP needs your help and partnership to establish a Black queer & trans owned community space/center in Atlanta, GA. Our community is vibrant, resilient, and robust, but lacks brick and mortar spaces to commune, heal, and build. Community centers can play a direct role in providing safe, affirming spaces for Black and brown queer and trans folks, young people, disabled folks, and others marginalized by systemic injustice and lack of infrastructure to thrive. We want to build a space where people have the freedom to grow as individuals, artists, and organizers.

This space will serve as a community arts center and venue space for artists, musicians, and creators as well as a dedicated space to host workshops and facilitate movement building. It will include green space for a community garden and a resource center to accommodate and provide for the needs of our community. And with your support, it will be sustainable.

This has always been a core aspect of Southern Fried Queer Pride’s mission. With your help, we can make this a reality and give Atlanta and the South the community space it deserves and needs.

Please donate and share this campaign with your families, friends, colleagues, and others!

For more info on SFQP, you can visit our website at  southernfriedqueerpride.com.

Any questions can be directed to [email protected].