Get ready to throb all night long.

What came first – the DJ work or the adult film work?

That's a really good question. They came hand and hand. I've been doing both since 1998, but I didn’t become known until 2005 for both once I started to take the work seriously. I worked hard on my body and appearance for the adult work. I started going to the gym, and taking good care of my skin, and got rid of the punk rock mod look that most of the guys had in San Francisco and went for a sexy clean cut look. As for the DJ work, I ran with a sexier look and a deeper darker club sound. Thus, DJ Pornstar was born.

You're currently active in both, right? So how do you transition from one to the other?

Have you been to Atlanta before? What's it like to come back?

I'm really excited to say this is my first time there. I've always wanted to go, and I'm looking forward to seeing the sites.

What should fans expect from your DJ set on Friday? 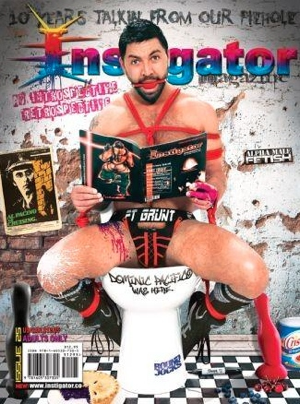 You're on the cover of the Instigator's 10th anniversary issue. How did that come about?

I was chosen by the owner of Instigator and director of Bound Jocks from Colt Studios. I'm very grateful.

On the cover, you're bound, gagged and on a toilet? Where did the inspiration for that come from?

The director from Bound Jocks came up with this concept. I have to say it was genius.

Right now, I love Sia – Chandelier. I'm actually wrapping up a remix I will play in Atlanta this weekend.

After Atlanta, what's next for you?​

From Atlanta, I go back on the road. The month of August, I'll be in San Francisco, Las Vegas, Dallas, EL Paso and Oakland.