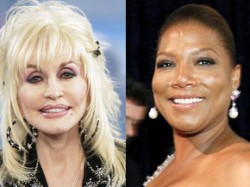 What do gay icon Dolly Parton and gayish singer and actress Queen Latifah have in common? The pair is in Atlanta filming “Joyful Noise.” That’s the same phrase used to describe the squeals of joy from gay fans wherever Parton performs.

The movie – as described by PR flacks – is a “musically-driven feature that tells the story of an unlikely partnership between two strong-minded women who are forced to work together to save a small town Gospel choir after budget cuts threaten to shut them down.”

The pair has done some filming south of Atlanta and shifts to Poncey-Highland on Wednesday. Parton kicks off her Better Day World Tour in July.

What with all of the wigs, drama and gay lingo, it's easy to confuse the ladies of "The Real Housewives of Atlanta" with drag queens. Now, two drag queens offer up a hilarious parody of the show.
Read more
Atlanta

NeNe Leakes loves her Atlanta gays, their galas and, apparently, hunky strippers who give her a lap dance with enough junk thrusting to make any gay man envious.
Read more
Atlanta

Uncle Poodle will so throw food in your face

Georgia’s gay redneck, Uncle Poodle, delivered enough sass and arm twirls during Sunday's “A Very Boo Thanksgiving” to prove a holiday is nothing without a holigay. Watch his gayest moments.
Read more