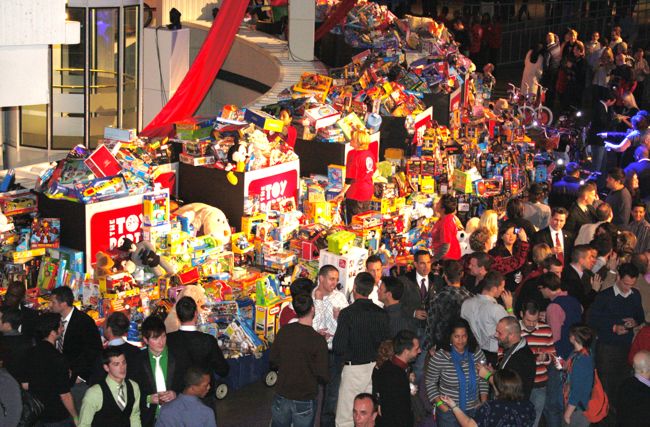 After a decade, most know how to behave and what to expect at gay Atlanta’s biggest holiday soiree. But just in case, here are some details on Sunday's 10th annual Toy Party at Americas Mart, plus some reminders to hang onto for cocktail parties throughout year. There’s a good reason that the annual Toy Party & Silent Auction won accolades as Best Benefit three times this year alone and was voted among the Bestest of the Best of Gay Atlanta. Everyone is welcome, and everyone matters. Organizers For The Kid In All Of Us put it right in their name: All. Of. Us. Remember that, and you’re more than halfway to enjoying open bars, Cirque du Soleil “Totem” entertainers, a silent auction, beats by Atlanta’s Bestest Gay DJ Vicki Powell, and if you choose, this year’s new VIP Experience or Ultra Lounge. You can even enter in advance to win the raffle for a Night on the Town with Totem. Here are a few other pointers to get in on the fun and keep it classy.

This is not a kegger

Is there a guy in a baseball cap at the door offering you a red Solo cup in exchange for $10? No. Instead, there is a person wearing a For The Kid shirt accepting unwrapped toys and gift cards for needy children. These are clues that Toy Party isn’t a beer bust. There are enough drinks for everybody at the sponsored bars, so double-fisting cocktails like it’s halftime at a football game makes you the Toy Party mess. Don’t be that guy.

Whatever the invitations say, the real dress code is Cocktail Party Fabulous. You’ll see it all. Jeans and suits. Santa hats and velvet jackets. Drag and tuxes. Sweaters and fake fur. And you better trust: Bow ties and/or suspenders. Toy Party calls for your own interpretation of your best holigay self. Check out our photo gallery below from years past for hints, then just go for it.

As For The Kid founder and Atlanta’s gay City Council member Alex Wan reminded local TV viewers, Toy Party doesn’t do half ass. Everyone who brings a toy or gift card and pays the $5 admission enjoys everything we’ve already mentioned. Of course, that incudes the silent auction with tickets to Totem by Cirque du Soliel, tickets to Atlanta Botanical Gardens, a trip to the Emmys, a trip to the Grammys, two tropical vacation packages and more. For The Kid continues to up Toy Party attendance of thousands – year, after year, after year, after year – and its contributions to Georgia kids to some $500,000 in its 10-year history. How? Extras. The $250 VIP Experience includes private bars, upper level access overlooking the event, swag, premium cocktails and bites plus VIP cabanas. Only VIPs get to watch artist David Garibaldi live as he completes a painting for the 7 p.m. live auction. You can also pay $50 for the Ultra Lounge for a taste of the VIP Experience. The lounge on the main level is accessible only to those who reserve space there and includes private tables and dedicated bars. If you go VIP or Ultra, the $5 entry is waived, but do bring a toy. So are you regular, unleaded or super? Go weigh all your options.

You can’t keep up with the Kardashians

Just as inappropriate as treating the place like a frat house is acting like there are E! cameras following you. There aren’t. While you strike poses with your hand on your hip and head slightly tilted, you’re not just uninteresting but missing the party. The Project Q crew and other professional photographers will happily snap your photo, but don’t stalk them. They’re working, and literally thousands of other guests want their moments (and outfits) captured as well.

Toy Party often attracts notable guests. Don’t be one of the people strategically positioned five feet from them so you can sweep in before anyone else can approach. There's no harm in networking, but handle yourself so that no one feels like alerting the authorities. If you can’t get an introduction, do not follow the person around as if you were a toddler in need of a diaper change. Wait for a good time, which is never in the restroom by the way.

Kate Middleton wants her crown back

Toy Party is about the kids, not about you. Say hello, mix and mingle with VIPs and commoners alike. No one likes a snob, so check the Hollywood attitude at the door and get over yourself, because everyone else will be if you don’t.

Don’t overstay your welcome. It’s always a good idea to be out the door before the last drink is poured. You may not turn into anyone's pumpkin but you certainly won't be anyone's Cinderella if you're lurking late. Toy Party shuts it down at 9 p.m. The Toy Party Afterparty starts at 8:30 p.m. Get the picture? Go check out the official Toy Party timeline to decide when you’ll make a graceful exit.