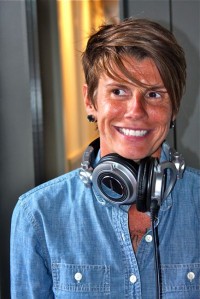 Even before the album comes out, gay musical duo Erasure brings “Tomorrow’s World” Tour to Atlanta, and as an added bonus for their Atlanta fans, DJ Vicki Powell spins the opening set before the Sept. 3 concert at Center Stage with an afterparty at Vinyl. “I am very excited to be a part of the Atlanta show,” Powell (photo) tells Project Q Atlanta. “Erasure is of course a big part of my dance club history and a major influence in the music that I play today. “They are also a blast to see live,” she says. “I can't wait.” After some time on solo projects, Erasure’s Vince Clarke and Andy Bell reunite on “Tomorrow’s World” for their first album since 2007 and their first U.S. tour in five years. The concert tour offers a preview of some of the album’s new tracks before it releases Oct. 4. Expect “electronic songs that sound totally contemporary and classic at the same time,” their publicity machine says. And you read that right: An afterparty with Powell at the helm goes down right after the concert at Center Stage’s adjacent club Vinyl. Tickets include the pre- and post-parties. In-person tickets are available at the Center Stage box office with no ticketing fees, or you can buy tickets online now. Pre-order "Tomorrow's World" here, and listen to the first single "When I Start To (Break It All Down)" below: Erasure - When I Start To (Break It All Down) by Mute UK Photo by Sher Pruitt