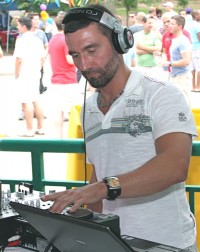 In a weeks-long battle to become the next mixmaster for Centaur Music’s “POPular” CD series, DJ Chris Griswold (photo) came out on top. To the victor and his fans go the spoils at two upcoming events.

Centaur is traveling the country to let local fans select each DJ for the “POPular” series. We followed the Atlanta contest for “POPular 5,” held during Halo’s Thursday Blur parties in January.

Gay Atlanta event promoter extraordinaire Chris Coleman changes the theme and surprises at Blur each week, and he joined with Centaur to stack three weeks of DJ battles back to back. Eight talented Atlanta hopefuls lined up to take their shot at the crowd, and the winner was chosen by audience response and online voting.

View some photos from a recent Blur Thursday to whet your appetite for the boys, booze and beats you’re in for each week.

Griswold took the prize and took to the tables on Jan. 27, then he got busy on the new CD with Centaur, the same company responsible for the “Global Groove” dance CD series. Griswold gives us a sneak peak of “POPular 5” (second photo) this Thursday during the Blur party at Halo. The Official CD Release party takes place March 6 at Heretic.

With so much going on, Griswold took a few minutes to let us in on him, his CD, his style and—hey, we had to ask—his hot bod.

Project Q Atlanta: What was it like to battle it out in the POPular contest?
Chris Griswold: I thoroughly enjoyed the entire process from beginning to end. Chris Coleman and the Centaur folks were great to work with. At first, I wasn’t going to enter until a friend pushed me to submit my DJ package to Centaur.

Having friends and acquaintances there to support me was amazing. Even more importantly, it is always a good sign when the crowd is smiling and grooving to the vibe.

How did it feel to win? 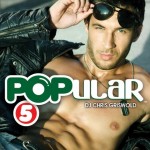 I had no idea where I stood in the running prior to winning the contest. When I got the call from Nick (president of Centaur), I thought he was calling to say “Thanks, but no thanks.” Instead it was fantastic news!

Winning the POPular series DJ contest allowed me to mix my own CD for the label, and will hopefully open more doors to other DJ opportunities in and outside of the Atlanta market.

What can we expect on the CD?
Since the series is titled “POPular”, all of the tracks are currently or have been on the Top 40 list.

The tracks range from songs inspired by Lady Gaga to Ke$ha to the Steve Miller Band. But the overall feeling is to just let it go and have a good time!

In three words, how would you describe your style at the tables?
Only three words, really? OK, here it goes: fresh, kinetic and progressive.

For live sets like the upcoming sets at Blur and Heretic, how do you “read” a crowd and make adjustments?
Before every gig, I “visualize” how I want the night to progress from genre to genre throughout the night. I try to stay pretty fluid with my gigs, but I know going in that I have a couple of “must play” tunes within each genre that will get or keep the crowd moving.

Regardless of the event, the venue and the crowd, I strive to drive the evening’s energy to consistently exceed expectations.

It seems you just get more and more “POPular,” and we can’t help but notice that you work out… It’s definitely about the music, but how much do you think a DJ’s “look” helps his popularity?
Thanks for the compliment! I believe that a DJ’s looks are important, but his/her energy from the booth to the crowd is much more important.

Working out and staying healthy also allows me to maintain stamina while I bounce around in the booth during my gigs.

Anything else your fans should know before they hit Halo and Heretic?
I just launched a new website. Check it out!