Badass The Black Madonna to unleash music magic on Heretic 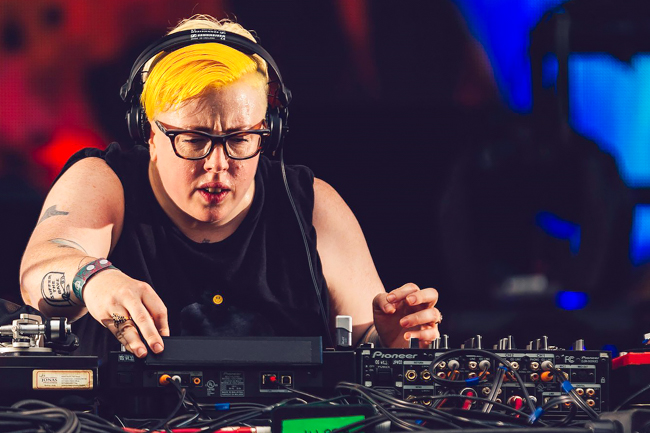 The Black Madonna's persona in the DJ booth isn’t about religion. It's more about religious experiences on any dance floor she graces,. We gathered intel for five fast facts before you and she hit Heretic Atlanta to make beautiful music together on Friday.

Before becoming an internationally in-demand queer DJ, The Black Madonna was nee Marea Stamper, who dropped out of high school after being bullied for her gender-nonconforming appearance. Now she actively champions inclusion of LGBTQ people, women over 40, and nonbinary people inside and outside the club scene.

Your girl got her start in music selling her mixes of underground DJs at raves in the 1990s.

What’s in a Name

Raised Catholic in Kentucky, her stage name is a tribute to her mother’s favorite saint, who is depicted in paintings from various regions and eras with dark skin. The paintings are preferred by some viewers and considered not only more accurate to the origins, but just a bit more of a badass than her pale counterparts.

With huge gigs all over the world like Coachella, and profiles in such illustrious outlets as the New York Times and Rolling Stone, The Black Madonna has been called “one of the world’s most exciting turntablists” by South China Morning Post and was named DJ of the Year by Mixmag in 2016. Beyond all that, her coolest accolade has to be playing herself as an in-residence DJ for the video game Grand Theft Auto Online.

Vicki Powell’s roving party crew Deep South is your connection to The Black Madonna’s March 22 set at Heretic. Because of course they are. it's one of only three U.S. dates on this tour, and making it a queer girl-power kind of night for all comers, Atlanta DJ Ash Lauryn and Powell share the opening sets.