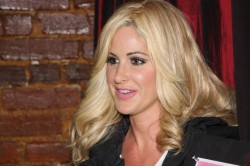 At this rate, Kim Zolciak and her on again, off again gay publicist Jonathan Jaxson must be angling for their own Bravo reality show. We’ve got the perfect title: “The Real PR Whores of Atlanta.”

Jaxson and Zolciak split — again — this week and Jaxson, true to his trash-talking ways, spilled his dish on Zolciak, the blond Barbie cast member from “The Real Housewives of Atlanta.” The train wreck came during a lengthy appearance Wednesday with B98.5 FM’s Steve McCoy and Vikki Locke. (Listen to the interview.)

Jaxson, dubbed “Atlanta’s own version of Perez Hilton” by Locke, says he fired Zolciak this time around and dropped this gem: “Kim is just a habitual liar. I think her wig is too tight. Kim is just as fake as her hair.”

Jaxson, who described himself during the interview as Zolciak’s former agent, manager, publicist and assistant, also offered this: “I am the one who has said in emails to NBC’s president and everyone else, that I was no longer interested in working with her because of her habits.”

But it was just this month that Jaxson appeared on Q100’s Bert Show with Zolciak to share with listeners that they mended fences, despite suing one another earlier this year. And Sept. 2, he was there with Zolciak at Blake’s for a chaotic appearance to promote her new single, “Tardy for the Party.” 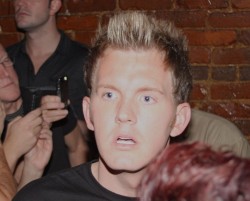 Oh, how things can turn on a dime when it comes to these two publicity-seeking divas. Jaxson (photo) says during the interview that he filed a restraining order against Zolciak on Tuesday after she threatened him.

“I have security now at my building and I am taking measurements. It’s not that I am scared of her. I don’t take threats about my life and safety lightly,” Jaxson says.

Jaxson refers to Zolciak as delusional and a liar throughout the interview Wednesday. But then he offers up this laughable — and somewhat delusional — line himself: “I can make someone famous overnight. I have been very successful at that.”

If by fame, he means being dubbed “Fame-Seeking Leech” by David magazine, nabbing a cover story headlined “Who the hell is Jonathan Jaxson?” and having Gawker call him the “World’s worst publicist?” then he’s nailed it.

Hopefully, Jaxon’s new security detail includes the member of his entourage that shoved a photographer during the Blake’s event. While he wasn’t adept at managing a friendly crowd, the guy certainly knows how to manhandle the paparazzi.

And Jaxson knows how to go from zero to drama in less than 60 seconds.