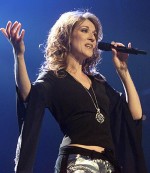 The Atlanta-Journal Constitution, in a preview of the diva’s stop in Atlanta on Saturday, argues that the entertainer should have an exclamation point attached to the end of her name “for piercing the highest of vocal registers.”

Not sure about that, but the paper does take a fun look at Dion’s career, including the up, down and in between moments that gay fans should know before they venture to Philips Arena tomorrow.

Speaking of divas, Elton John pairs up with Billy Joel for a March 14 performance in Atlanta.