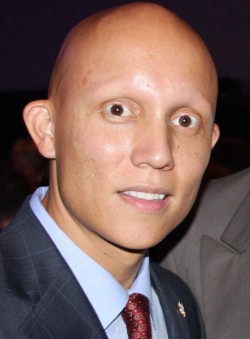 The District 6 race for the Atlanta City Council — already a hodgepodge of six candidates gay and straight — is heating up. There’s an ethics complaint, campaign sniping and threats of a lawsuit.

The post, traditionally viewed as the gay seat on the council, includes heavily-gay Midtown, Virginia-Highland, Morningside and portions of Druid Hills. The twists in the race already include a lesbian incumbent who decided against seeking a third term, a challenger who stepped in only to step out a few months later, and a candidate who lost by just a handful of votes four years ago.

Two other candidates resigned their seats on city boards that deal with development issues after questions were raised, though you’d think that sort of experience and background might benefit a city council member.

And now there’s this: an ethics complaint against Steve Brodie, one of three gay candidates in the race, and threats from the campaign of Miguel Gallegos (photo), one of the other gay candidates, to file a libel lawsuit against Atlanta Progressive News.

First, the threats of a lawsuit: Atlanta Progressive News — the folks that broke the news of the Sept. 10 raid at the Eagle — recently sent a questionnaire to the District 6 candidates. Pretty typical stuff during a campaign season. Three candidates — Bahareh Azizi, Brodie and Liz Coyle — responded and three — Tad Christian, Gallegos and Alex Wan — did not.

APN, of course, published the responses and credited Azizi with providing the most insightful answers. Then things got weird.

APN reported that they were included, apparently by mistake, in an email from Gallegos Chief of Staff Mitch Esmond to the candidate laying out a plan to deceive APN and say that they responded to the questionnaire when they hadn’t. APN published the email from Esmond to Gallegos:

Well you did not answer me about the questionnaire but I have gone ahead and prepared some answers to the questions and if you are ok with them and believe them to be good solutions I can send it to Matthew and say we have no idea why they did not receive the answers as we had sent them a few days ago and although we understand if they can’t accept them we hope that they would accept them so that the voters can have a full picture of those who did take an active interest in preparing answers.

When that was published, Coyle called it “outrageous” and called for Esmond to be fired. Then Esmond responded to APN with threats of a lawsuit.

Esmond threatened APN with a “liable” [sic: mis-spelling] suit, if APN does not issue a retraction and public apology.

“We believe that this retraction or correction if you prefer will take us off the road of considering this a liable issue and return it to just a poor decision that has been corrected. We hope you will… make right was has been done wrong, however time is of the essence and we welcome you reply by 5:00pm today or will have no choice but to address this with our own press release,” Esmond wrote. 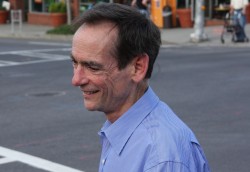 Now the ethics complaint: A Midtown resident alleges that Brodie (photo) sidestepped state ethics laws that limit the amount companies can contribute to a candidate, according to Creative Loafing. Four campaign contributions totaling $2,875 came from four companies that share the same address, so say the complaint, and that company — Tivoli Properties — had a rezoning request before the Midtown Neighbors Association Land-Use Committee and NPU E in 2007 that Brodie supported.

Brodie says he received the OK — twice — from the state Ethics Commission and plans to file a formal response to the complaint this week.