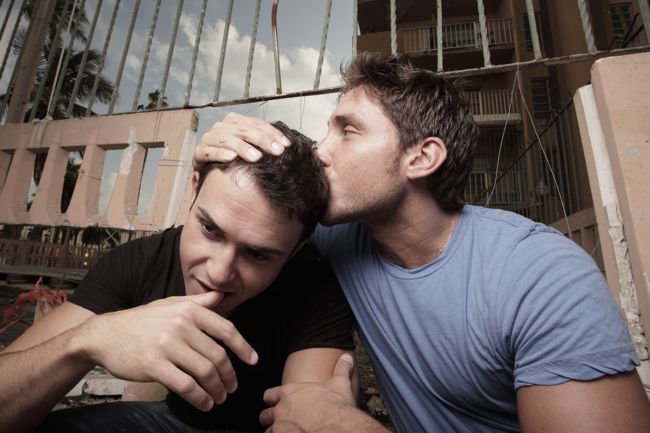 This is one of those Things We Don't Talk About. Alcoholism and addiction. But they're talking about it at the Galano Club, gay Atlanta's meeting place for doing 12-step programs. And I sat in on one of their AA meetings to find out what it was all about.

I became curious after attending a sober cookout hosted by a friend who is going through the program. He hosted about 30 guys from his AA group, who filed in armed with bottled water, Diet Coke and more desserts than I've ever seen in my life. I had to check online for reports of a gaggle of gay men holding up the Publix bakery at Ansley, demanding all the two-bite brownies and petit fours.

Looking at all of them together, the crowd could have easily passed for any group of guys you would see on the patio at Burkhart's. Of course, that's probably because they were those guys in another time. Then I felt foolish for expecting any different, like they would all resemble the stereotypical “movie drunk.” I was Facebook friends with one of them. I had interviewed another for a story a couple years ago. These were guys I come across every day around town.

So a few days later, I tentatively asked my friend what he thought about me sitting in on a meeting so I could write about the experience. He had me contact his sponsor, a Galano board member, who told me to come on by. This wasn't going to be yoga with the gay grays.

Galano is located in the heart of gay Atlanta, a nondescript two-story building plunked down between One Midtown Kitchen and Ansley Animal Clinic on Dutch Valley Road off Monroe Drive. After meeting up with my contact, I stepped into the meeting room.

On the wall at the front of the room, on a big board, is a list of the 12 steps. There was a bunch of AA literature in a bookcase. Someone had written “Welcome” in several different languages on a whiteboard.

Posted prominently on two different whiteboards was a list of upcoming birthdays. But the “ages” were odd, ranging from two to 16. But these weren't your typical birthdays. It was the length of their sobriety.

Let's have an AA meeting

Everyone filed in and pulled chairs around in a big circle. There were about 30 people, which I'm told is a busy night. It was about 80% men and about 95% white, ranging in age from late 20s to early 60s. Shorts or jeans and a polo or t-shirt seemed to be the typical dress. A few were in business suits, apparently arriving straight from work. I recognized one older guy I used to see at Blake's who stood out because he always hit on guys a lot younger than him and did it in a sloppy, over-the-line way. I was glad to see him -- finally.

At every meeting, there is a chairperson who leads it and keeps things on track, a role that switches from time to time. At 5:45 p.m., the chairperson started the meeting. Or about 5:45. “The clock is a little bit off, like all of us,” someone says.

It's a regimented routine. The first 10-15 minutes are filled with a series of items run through like we were ticking them off a checklist. There was silent meditation. Someone read the Serenity Prayer.

God, grant me the serenity to accept the things I cannot change,

The courage to change the things I can,

And wisdom to know the difference.

Then the 12 Traditions and the AA Promises.

Here and there, people would repeat something the chairperson said and I found myself struggling to keep up. But the structure is no accident. Addiction has made their lives even more chaotic than usual, so there is comfort in structure. They can depend on the same lines repeated at every meeting.

Then discussion time starts. Every meeting has a discussion leader, and this time it was a guy in the program for a couple of years relocating to another city. This comes with the usual stresses anyone else experiences when they move, but through the discussion I learned that for an addict there is plenty more to worry about. They've got a home here, found a meeting they like, have a support system in place. Now they must create that comfort zone again, a challenge that can lead to backsliding.

Discussion time takes up the bulk of an AA meeting. After the discussion leader finishes, the floor is open to anyone. And yes, they all say, “Hi, my name is ... and I'm an alcoholic.” And everyone says hi in response.

Some people spoke up right off the bat about their experiences moving cities and finding new groups. But often there was an uncomfortable silence. The meeting isn't going to end if no one says anything—they will sit there for the rest of the hour in silence. Luckily there was no more than a minute or two of silence. But that's a long time to be in a room full of people sitting in a circle. There's lots of feet shuffling and throat clearing.

When they do speak, it's more lighthearted than you would think. An AA meeting isn't all doom and gloom -- if it were, I doubt people would keep coming. There's a lot of humor, especially about how much they used to drink and smoke and do other stuff that led them to recover. It almost becomes competitive after awhile.

One guy with an accent straight out of “Midnight in the Garden of Good and Evil” told the story of not knowing any other gay people when he came out. When he made his first trip to a gay bar, he said, “My God, I have found my people.” It's a familiar story for many of us.

In an also familiar way for many gay people, he turned out to be an alcoholic. When he went to his first AA meeting, he said the same thing from years before -- “My God, I have found my people.”

“This has given me so much and I'm grateful every day for it,” he told the group.

When the discussion ended, it was time for birthdays. One person was in charge of handing out chips, which are literally like poker chips. Someone had a one-year birthday, and we all stood in a circle with our arms around each other and sang “Happy Birthday."

The discussion leader then asked if anyone had “any burning desires.” No one answered and he thanked everyone for a good meeting.

Many left to get on with their day. Others milled around to chat and hang out. Plans were made to go to dinner. All pretty typical post-meeting behavior, I'm told. I wonder if it's because they enjoy each other's company, or that they don't want to be left to themselves in case any burning desires creep up. Idle hands and all. Probably a little of both.

It made me think of a woman who showed up late for the meeting and instead of joining the circle with everyone else, she took a seat against the wall and as far as possible from the group. She was in rough shape. After 20 minutes, she left. Where did she go?

But I learned that the group is what you make of it. No one is forcing anyone to be there. Once you're there, you can talk or not talk. You can leave when you want to leave. But if you stay, you'll be fully supported. There will be lots of smiles, lots of laughs. There will be some sad things. If you're lucky there will be a profound moment. No matter what, they just have to keep going.

(With the permission of a board member of the Galano Club, a meeting place for LGBT people in 12-step programs, I sat in on one of their recent AA meetings. The board member and the chairperson of the meeting were aware I was there to write about it for Project Q. I agreed not to use anyone's names.)