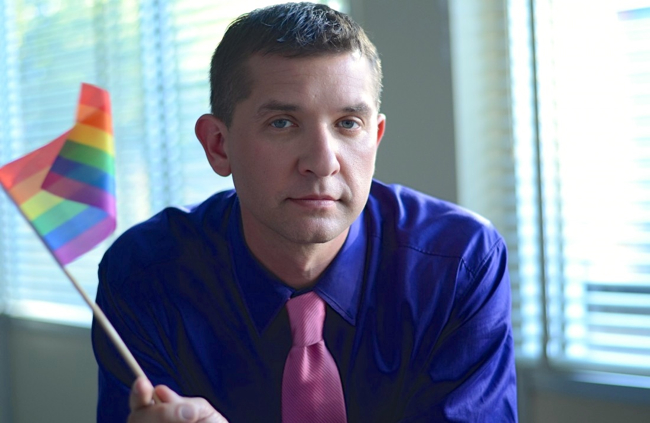 To say he’s lived and breathed his latest feature film “Tennessee Queer” the last four years is an understatement. Writer, producer and co-director Mark Jones returns his comedy to Atlanta this weekend as he winds down its theatrical run.

Used to being out and open in New York with his partner Paul, the film’s Jason Potts (Christian Walker) returns to his hometown in Smythe, Tenn., only to realize that life’s still pretty hellacious for gay teenagers growing up there. That hasn’t changed since his own high school days. Wanting to do something about it, Jason comes up with a plan to stage a local Pride parade while he is home.

After some hoops, he gets his wish, but what he doesn't realize is that a city council member is working with a self-righteous minister to gather up the young participants after the parade and haul them off to an ex-gay ministry. Coming home also means dealing with Jason's eccentric mother Rebecca, who wants Jason back in the area.

Jones shot “Tennessee Queer” at the end of 2011 along with co-director Ryan Parker, a longtime collaborator. It was finished in only 19 days, over a course of four weeks, using an all-local Tennessee cast. It had its world premiere in July 2012 at Philadelphia QFest and then began a run of other LGBT film festivals including Atlanta’s Out On Film that fall. In all, he spent well over a year on the festival circuit, mostly LGBT ones. He did attend a non-LGBT festival in Oxford, Mississippi and was relieved that the humor went over well there.

Since February, the director’s been screening the film theatrically from Los Angeles to a slew of other cities. He talks to us about making the movie and reminds us why being gay in Atlanta is different than most of the South. While he’s shown the film all over the country, Jones says it’s Southern audiences who most respond to it.

“I think it is pretty broad based,” he says. “And I think a lot of people can identify with the crazy Mom.”

“Tennessee Queer” is fictional, but Jones doesn’t deny that some of the characters were based on real folks.

Jones was born and raised in Memphis but went to school in South Carolina. He later lived in New York for a number of years but moved back to Memphis in 2005. As a Southerner, he feels progress has been made in the South towards LGBT equality, but it still needs some work.

“Big cities have come a long way – Nashville is doing well,” he continues. “Memphis, My partner and I live there. We have a gay and lesbian community center around the corner. Dallas and Houston are doing well. Atlanta. But I think the small town South is where we need to focus our attention. It can suck to live in some of those areas and be gay.”

Moving forward, Jones hopes to get the film on DVD soon and then tackle more projects.

“I have a ton of half-written scripts and ideas,” he says. “I’ve written some small short scripts. I am working on a script right now that could go as a film or a play. I’m deciding that.”

“Tennessee Queer” opens April 18 at Plaza Theatre and plays each night at 7:30 p.m. Jones does a Q and A after the Friday and Saturday screenings.