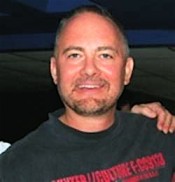 After the success of last year’s “The Butch Factor,” director and former Atlantan Christopher Hines unveils his edgier follow-up “The Adonis Factor,” about body image issues among gay men, on Sunday at Out on Film.

Hines will conduct a question-and-answer session after the documentary. He says that the discussions after previous screenings have become heated, and that some men say that they never realized how much they would see themselves among the men depicted in the film who are looking for physical perfection.

The director knew he was doing a potentially hot-button film.

“We are a community based on a sexual desire,” he says. “Gay men can judge each other. We are a tough crowd. I wanted to just put a mirror up and connect the dots, let the subjects talk.”

“The Adonis Factor” examines how society looks at the male body with posters and billboards objectifying models and leaving many in the community feeling that this is how they should look. Among the film’s subjects are a number of men who spend significant amounts of their time bulking up their bodies.

The director interviews two Titan models in the film about their looks and their bodies. Titan’s Brian Mills had seen “The Butch Factor” and liked it. He was open to talking to Hines and sharing two of his performers. The film also features several Atlantans as well as the local gay-owned fitness center Urban Body Fitness.

The film also touches on an issue not discussed much – the way gay men can look at and bond with “their own” and dismiss others in the community who aren’t as good looking as they are.

“When the AIDS crisis came around, we were very sensitive to each other, but I think we need to be more considerate of each other,” he says. “I do think some men need to ask themselves, ‘How much time am I spending on this? And how many friends do I have?’”

While “The Adonis Factor” is playing the festival circuit, Hines is getting ready to work on two more films. One compares straight relationships to same-sex ones. Hines was inspired by the recent ruling on Prop 8, California’s voter-approved gay marriage ban, and the finding that relationships are not fundamentally different.

The other film in the works is about the search for Mr. Right: how single gay men go about finding relationships.

Hines, who lived in Atlanta from 1997 to 2002, is a former CNN employee. After leaving the city, he worked for Country Music TV before moving to E!, where he produced “True Hollywood Stories” and the series “THS Investigates” on topics ranging from women who fall for convicted killers to plastic surgery nightmares.

He still enjoys visiting Atlanta, which he says has terrific gay offerings and provides a nice balance to his home in California.

“The Adonis Factor” screens Sunday at 4 p.m., followed by the Hines Q&A and an after party at Urban Body Fitness. Apre-cocktail party hosted by GLAAD at Apres Diem is set for 2:30 p.m. View the full day’s film schedule. For more information, call 678-237-7206 or visit Out On Film.