Did you catch Augusten Burroughs in Atlanta? 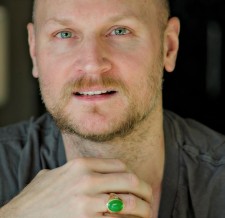 It was a big weekend in gay Atlanta, but one gay luminary slipped right under our noses. “Running With Scissors” author Augusten Burroughs was in town pimping his new book “This Is How.”

A shiny object caught our attention while mindlessly trolling Twitter to ward off the rain on Saturday night. That glimmer was a twitpic from CNN reporter Randi Kaye, who tweeted, “Hangin with @augustenburroughs in studio this morning. Chatted about his new book This Is How.”

If we were the type, the writer would be one we’d celebrity-stalk, so it was a distraction worth following. Sure enough, Burroughs (photo) – known mostly as a humorist who writes autobiographic short stories from his messed up childhood, alcohol recovery and most recently his coupled-up experiences as a famous author living in New York – confirmed hangin’ in the ATL. He called the CNN reporter “generous, funny and smart.”

Later that day, Burroughs hit SCAD Atlanta with a reading from “This Is How.” If you’re wondering “’How’ to… what?” let the book’s subtitle take you down the rabbit hole that is Burroughs. “Proven Aid in Overcoming Shyness, Molestation, Fatness, Spinsterdom, Grief, Disease, Lushery, Decrepitude and More. For Young and Old Alike.” Or as Burroughs puts it, for once, “My new book isn’t about me. It’s about you.”

The next morning, the author who puts all his gay crazy in writing was out of here and headed north on his quickie book tour. Hopefully, we’ll have advance notice next time. You know Outwrite would have told us.

Did you see him? The would-be celebrity stalker in us would love to see the pics and share them with our readers. {[email protected]” title=”Shoot us an e-mail.”}

To find out even more about the book and what inspired Burroughs to go all self-help on us, check out his interview in Creative Loafing.