Did SoVo really steal a story from Fenuxe? 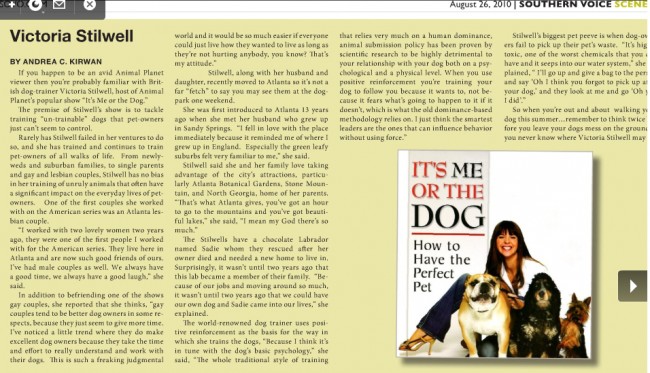 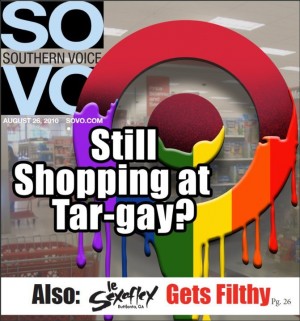 Turns out, they were. So familiar, it felt like we had read them once before. We did – in the Aug. 12 issue of Fenuxe. In fact, every direct quote in the piece from SoVo freelancer Andrea C. Kirwan is word for word from the print or online version of the Fenuxe story, which was based on an interview with Stilwell conducted by the magazine’s senior writer, Patrick Saunders.

Unfortunately, that’s a phrase already familiar to SoVo’s owner, Gaydar. They lost the editor of their first gay paper, the Atlanta Free Press, shortly before it collapsed and stopped publishing. He quit after reports surfaced that he was fired from his last job – ironically, at SoVo before Gaydar bought it earlier this year – for fabricating two stories.

But back to Fenuxe, SoVo and Stilwell.

How’d we figure this out: We read the Aug. 12 story in Fenuxe, which was their big interview for the pet issue. We even blogged about it, since Stilwell now lives in Atlanta and includes gay couples on her Animal Planet show, “It’s Me or the Dog.”

Earlier this week, we began a quixotic journey to find the Aug. 26 edition of SoVo in our rounds collecting LGBT pubs. Half-a-dozen places and 30 minutes later, we never did find a SoVo distribution point in Midtown with the paper. So we went online and nabbed it there. SoVo, like many print publications, posts a PDF version of the print product online and they use Issuu.com.

As we flipped through the paper electronically, we got to the piece in question near the back of the book.

Don’t bother trying to retrace our steps by checking the online PDF of SoVo. Since we asked them about the story on Wednesday, SoVo has removed the entire PDF from both its website and Issuu. (At least two other issues of the paper remain on Issuu.) As best we could tell on Wednesday, SoVo’s Stilwell piece was never included in the content on their website. But at least we snapped a screen capture — see above — before the story in question vanished.

Similarities: The Fenuxe headline? “Victoria Stilwell.” The SoVo headline? “Victoria Stilwell.” The Fenuxe story is in Q&A form, which apparently made it that much easier for Kirwan to lift the quotes she needed to insert between the few paragraphs she actually constructed herself. Again, every direct quote in Kirwan’s story is the same as the quotes in the Fenuxe piece, published two weeks earlier.

Reaction: There a few ways that this – and we use this phrase generously – duplication could have happened. Stilwell’s PR reps could have gotten the quotes from Stilwell and provided them to both publications. Or a syndicated content service could have provided the interview to both places. Or both pubs interviewed Stilwell at the same time during a conference call or at a public appearance.

Stilwell’s quotes are identical and quite Atlanta-specific, so it’s difficult to imagine that she provided them to both outlets at different times yet said exactly the same thing.

So we asked Fenuxe about the duplicated stories. The magazine’s editor, William Duffee-Braun, confirmed that Saunders conducted his own interview with Stilwell and that the piece is their original work.

“One of the reasons we launched Fenuxe Magazine was to provide an outlet for local talent to display their abilities,” Duffee-Braun says. “That is why we have never used any syndicated content. Our Victoria Stilwell interview was conducted by our Senior Writer, Patrick Saunders.”

We also asked Kirwan about the duplicate quotes and the allegation that she lifted large portions of her story from Fenuxe. She never responded. So we went to SoVo Editor David Valentine, who said on Wednesday that he’s looking into the matter. On Friday, he offered that they are still investigating.

Read the Fenuxe story and then compare it to the SoVo story above — click on the image for a larger version – and draw your own conclusion. But we’re pretty certain you’ll get to the same place we did.