Some members of a gay group that initially supported a gay Atlanta man who was beaten are now cozying up to the attorney of one of the suspects and alleging that the victim was taunting his attackers before the Feb. 4 incident.

Members of the group, Change Atlanta, met with the mother of Dorian Moragne and his attorney on Wednesday as she said her son “is a good kid” despite a lengthy criminal record. Moragne, Dareal Demare Williams and Christopher Deon Cain have all been charged in the beating of Brandon White. A group of men attacked White, beat him, yelled anti-gay slurs, recorded the incident and posted it to a hip hop website. 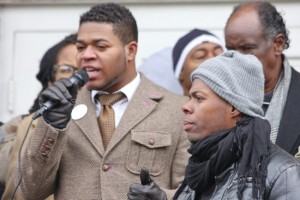 White called his attackers “monsters” in an emotional press conference on Feb. 8. Change Atlanta organizers Devin Barrington-Ward (photo center) and Adolph Arromand (photo right) stood behind White in the press conference that received national media attention and organized a Feb. 11 rally to support him. White said at the time that he did not know his attackers.

Now the two men are among people who met with Moragne’s mother and his attorney, Jay Abt, with TV cameras in tow and are alleging that White threatened to publicly out some of his attackers as gay. That in turn prompted the Feb. 4 attack, they say, that has drawn the attention of the FBI and U.S. Attorney as a possible federal hate crime.

Abt, in a comment he apparently left on Project Q, hinted that Moragne might be gay and in a relationship with White.

On Saturday, Change Atlanta is hosting a community discussion with Moragne’s mother and Abt at the Rush Center. A 90-minute discussion is scheduled to begin at 1 p.m. with a press conference to follow.