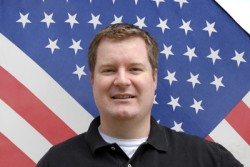 Erickson’s been ranting since the mass shootings in Arizona over the weekend that the real problem with all of this is that America needs to find faith in Jesus Christ. When Media Matters, whose founder is former conservative and now openly gay David Brock, pointed out that not everyone in the U.S. is Christian and that U.S. Rep. Gabrielle Giffords is Jewish, Erickson characteristically flipped:

The atheists and twinkie eaters at Media Matters, also known as the Westboro Baptist D.C. Branch, are enraged that I dared mention Jesus and the absence of discussing him in the debate over Arizona.

Westboro Baptist Church is the one of Fred Phelps, the patriarch of a clan that travels around the country, including Atlanta last year, to rally against gays and LGBT people. Twinkies also have a derisive history among gay folks. Twinkie defense, anyone?

Erickson (photo) has a history of outlandishly offensive statements. It helps gets hits on his Redstate, after all. It landed him a guest role on CNN and, as of last week, an evening radio show on Atlanta’s WSB.

Did his statement add to what critics say is a long list of anti-gay insults? Gawker seems to think so. And this is the same Erickson, after all, that equates the agenda of NAMBLA to the gay agenda and calls Kevin Jennings “a profoundly sick and immoral human being.” Jennings is the founder of the Gay, Lesbian and Straight Education Network and now serves as Safe Schools Czar in the U.S. Department of Education.

Nice to know that Atlantans can now tune into Erickson and his over-the-top verbal assaults three hours a night each weekday on WSB. And here we thought the ratings-leader was cleaning up its anti-gay act when it dumped Michael Savage.