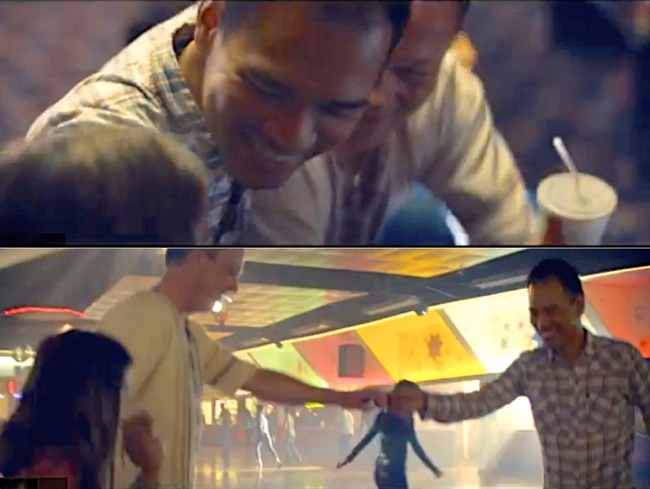 Atlanta-based Coca-Cola's Super Bowl ad was called pink-washing even before it aired on Sunday. But did rallying against the resulting backlash actually quell any of the anger that created its Olympics PR woes?

Unless you’ve been living under a rock, you know that activists are all over Coke’s ongoing gay public relations nightmare. The company’s sponsorship of the Sochi Winter Olympics – and silence about Russia’s anti-gay laws – is rubbing plenty of people the wrong way.

Enter the Super Bowl ad (video below). Among the wide array of Americans singing “America the Beautiful” in both English and other languages, it includes real-life Latin American gay dads holding hands and hugging their daughter at a skating rink (top photos). The melting pot ad didn’t have to reach far to melt hearts. Or in the case of xenophobes, homophobes and stupid people, a full social media meltdown. Deadspin nails it:

It was sweet and forgettable—there are many things not to like about Coke, but their harmless pandering to the idea that America is, among other things, a polyglot nation is not among them—except to dumb, intolerant people who were mad about non-English languages being used in combination with America. They were angry, and used the hashtag #fuckcoke so that everyone would know just how angry they were.

Forget that “America the Beautiful” was written by a lesbian, much less that it's not the national anthem. Other tweets since deleted echo the hate (and misinformation). 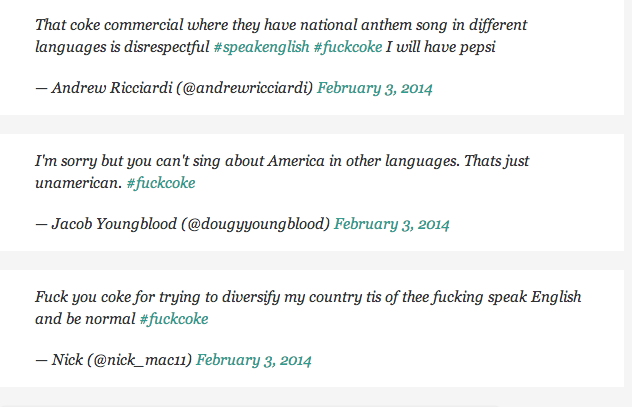 In case you haven’t heard, every person in the ad is an American. Here are their stories. And gays quickly joined the online voices who were rightly up in arms. On the bright side, the #fuckcoke hashtag has mostly been taken over by counter-protesters calling out the haters.

If the #fuckcoke tag tells us anything, it’s that Coke failed to woo the coveted racist white trash demographic.

But as the pre-game stories wondered about the effect of “pinkwashing the Super Bowl,” did the rallying behind Coke on the right side of the issue move the shiny object that public attention follows? Did the ad soften opinions hardened by the Sochi sponsorship kerfuffle? Watch the ad and decide for yourself: