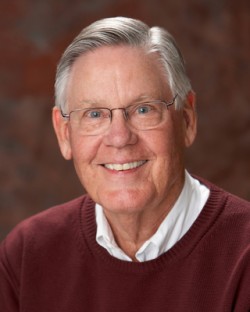 There he goes again. Cranky conservative Dick Yarbrough is spewing anti-gay punditry, this time comparing gays to people who cruise the state in hoop skirts and insulting immigrants, women and African Americans for kicks. Yarbrough (photo), for reasons we can’t quite fathom, writes a weekly column for Neighbor Newspapers, which again, for reasons we can’t quite fathom, apparently draws readers to its chain of outlets that covers areas Outside the Perimeter, including Cobb, north Fulton, Cherokee and Douglas Counties. The company includes the Marietta Daily Journal, which also published Yarbrough's column. In his July 13 screed, he recounts a discussion with friend Gay Blade -- wait, really? -- who calls in warning Yarbrough that Georgia lawmakers may soon consider a bill similar to one in California that would include the contributions of LGBT citizens in social science classes. Say what, Yarbrough questions.

California schools are already required to teach about women, blacks, Mexicans, entrepreneurs, Asians, Europeans, American Indians and Labor. I don’t know how they are going to cram all of that into one school year, unless they can locate a bisexual Mexican-Indian entrepreneur who belongs to a labor union and knows a lot of blacks and women in Asia and Europe. That could save a lot of time and allow the schools to offer some electives, like math and science. And English.

But wait. Yarbrough is just getting warmed up.

“Our children will find out that President James Buchanan and Vice President William R. King were more than, shall we say, good friends,” she said coyly. I didn’t want to tell Gay that the first thing the teachers need to do is tell the students who James Buchanan is before they talk about what he did. Not many people have ever heard of him. That is because he didn’t do anything while president. Well, at least that is what I thought until I talked to Gay Blade.

And then there’s the kicker. Pay attention, hoop skirt-wearing homos.

Besides, we have a lot of pride in Georgia’s history and the last thing we need to know is that some guy we named a county for used to run around at night in hoop skirts. With all due respect to California, I don’t think our kids could handle that kind of stuff. They are going to be bummed enough as it is when they find out about James Buchanan and William R. King.

Don’t you worry, conservative friends. Yarbrough knows some folks in the General Assembly, and they would never let such a thing happen in Georgia. He’s probably more best buds with Bobby Franklin than Simone Bell and Karla Drenner. But we do agree with him on this one point – it won’t happen anytime soon in this state; Georgia can’t even include the gays in its effort to toughen anti-bullying laws. But back to the hoop skirts. Yarbrough isn’t one to soft-pedal his anti-gay views. He’s used his column to advocate that Marietta officials unleash dogs on the gay men who cruise city parks. Yarbrough wants the gays chased back “to Atlanta where they belong.” Seriously. All gays don’t live in the City of Atlanta, of course. And most – we can comfortably say nearly all – don’t wear hoop skirts, especially in this summer heat. Yarbrough should just ask his northern ‘burb neighbor Alan Tart for confirmation on that one. Send Yarbrough an {encode="[email protected]" title="email"} and let him know we said hey, girl hey!