Dial down the rhetoric over Pride grand marshal 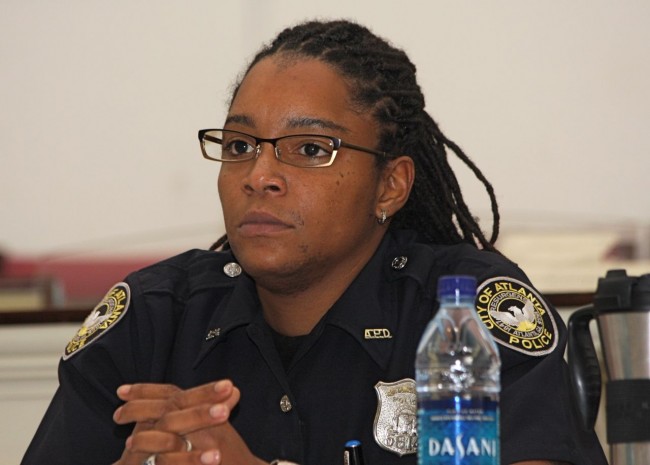 The rhetoric surrounding Dani Lee Harris (photo), the LGBT liaison for Atlanta police, as a grand marshal for the Pride parade on Sunday is getting red hot–again–and the grandstanding is getting a little out of hand.

The controversy came to a boil as soon as the Atlanta Pride Committee announced Harris as one of two grand marshals for the parade. Though the selection was made in late August, it wasn’t made public until Sept. 22. That came 12 days after the Atlanta Police Department stormed the Eagle and arrested eight people amid allegations of anti-gay slurs and mistreatment by officers. When Pride announced its grand marshal picks, you could just smell the controversy coming.

It did. Pride explained their choice and defended Harris — who was left out of any role in the raid until after it took place and became public — and then, in a conciliatory move, added Eagle co-owners Robert Kelley and Richard Ramey to the pool of honorary grand marshals. They graciously accepted the honor.

Fast forward a few weeks and here we are: Days before the parade, furor erupts again, this time boiling over. On Monday, popular gay blogger and columnist Michael Alvear published an incendiary piece titled “Atlanta Pride Committee throws Eagle raid victims under the bus.” Then Kelley weighed in Tuesday with a letter to Pride asking that Harris not wear her police uniform during the parade.

Media outlets, including Southern Voice and the Atlanta Journal-Constitution, soon followed with their coverage of the flap. And finally, Harris says due to her fears over the safety of her 10-year-old son from the zealous opposition to her Pride appointment, she won’t wear her uniform during the parade.

Pride To Victims: Drop Dead. The message is clear: The gay liaison to the Atlanta Police is more important than the civil rights of the 62 victimized men. And by extension, the entire gay community. Because what happened to those men could have happened to any of us.

To see gay men kicked, hit, and searched with no reason is wrong, and to be made to lay face-down in the floor, and have the officers hi-five each other like it’s a party is wrong. To have them say “this was fun we should do this to a fag bar every week” is wrong. And having Officer Harris in her uniform saying that it’s OK is wrong.

If Officer Harris chooses not to be there because of it, so be it, but that will be something she chooses to do. After being released from jail she was one of the first persons we saw. She apologized for their actions and then got up and told everyone it was OK. Please.

“My decision was based solely on my family,” said Harris, who will be the 39th Pride festival’s first intersex (someone whose internal or external sexual anatomy or chromosomes don’t fit the typical definitions of female or male at birth or puberty) grand marshal. Her 10-year-old son will be accompanying her on a float. “I was fearing for his safety more than anything.”

Enough already. It’s time for everyone to take a deep breath and tamp down the rhetoric.

Harris was picked mostly for her courage in coming out as intersex as a working police officer, which given the environment she works in — reference the Eagle raid — was quite a bold move. It sets an example to closeted LGBT folks that coming out and living honestly is the way to go, one of the key messages of this weekend’s Pride celebration. Even Alvear, who helped reignite the controversy this week, admits this much: Harris “was an admirable choice BEFORE the raid.”

If Harris was a commendable choice before the raid, why not now? Pride didn’t deliver the honor to Harris as a way to applaud the police department; they did it to honor her courage. And despite several public claims by others to the contrary, Harris has not spoken out in favor of the raid or her employer’s actions that night in any way. She clearly was left out of the investigation that led to the Sept. 10 incident, wasn’t aware of it until calls from reporters the next day, and then spent hours and hours explaining police tactics — not justifying the raid — to reporter after reporter after reporter.

In conversations she had with Project Q Atlanta and Southern Voice, Harris openly criticized the police department for leaving her out of the loop, a sentiment later conceded by Chief Richard Pennington.

But Harris, too, has tweaked the controversy with her comments about fearing for the safety of her son. Really? Gay folks remain angry about the raid, but to imagine anyone would react by lashing out at a 10-year-old during the festive time of a parade is a little much to fathom. She also quipped “they got this one” to those angered by her participation in the parade.

Venom about the Eagle raid is best left directed at the Atlanta Police Department and the actions of its Red Dog Unit, not at Harris personally. That’s been lost in the recent dust up.

The Eagle 8 return to court on Tuesday — two days after street sweepers will clean up behind the parade and the thousands that will pack the streets to watch. Will there be any anger — or interest — left for that?

What’s your take on the flap over the parade grand marshal? Much ado about nothing or a misstep that leaves you wondering wtf? Leave your comments below.