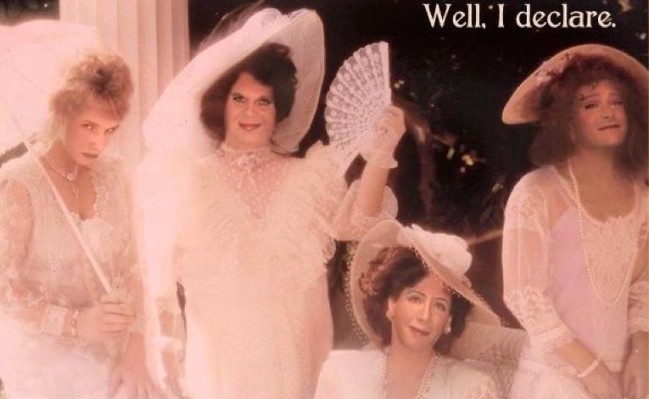 It’s become a tradition in gay Atlanta. The guys of the Process Theatre Company return as TV’s “Designing Women” this weekend with two new episodes. Also a tradition, they’re selling out fast.

In case you’re new to the party, the “Designing Women Live!” stage show puts male actors in drag in the roles of ’80s TV’s favorite Atlanta ladies featuring actual scripts from the TV show. They send up two timeless – or is that so dated you’ll love it? – episodes of the TV series, each serving as one act of the live show.

Topher Payne as Julia, DeWayne Morgan as Suzanne, Frankie Asher as Charlene and Johnny Drago as Mary Jo (photo) return for the fifth installment since 2010’s debut. Once again, the Thursday through Sunday performances benefit the company and their host venue, OnStage Atlanta. Both are non-profits, so your tickets are tax-deductible.

Let the hilarity ensue as the episodes “Big Haas and Little Falsie” – in which Mary Jo considers breast implants – and the iconic “They Shoot Fat Women, Don’t They?” – where Suzanne attends her high school reunion – take the stage.

That’s the good news. The more pressing matter is that, as of Wednesday morning, all but two shows are sold out. Buy your tickets online now to the Thursday show at 8 p.m. or Saturday at 5 p.m. while they last. You can also purchase tickets by calling the OnStage Atlanta Box Office at 404-897-1802.