Just call him the little engine that could. The gay Cochran, Ga., teen who pushed and won the right to bring his boyfriend to prom kept up his activism at the L.A. Pride “Life Out Loud” event Saturday.

Martin spoke to the West Hollywood partiers (top photo) and enjoyed the California sun with his boyfriend. He also took the time for a question-and-answer session with Los Angeles blogger Greg Hernandez of the popular GregInHollywood site.

Statewide and national support grew quickly for Martin, who was subsequently kicked out of his parents home when the media attention went national.

Martin speaks candidly about his strained relationship with his parents, his current living situation, and his future in activism. 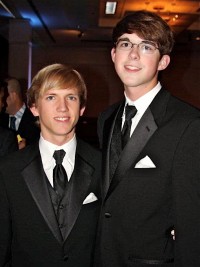 Q. People have come to feel protective of you and we want to know where you are living?
A. “Right now, I’m in between places. I’m half living with [boyfriend Richard Goodman] and half living with a really, really close friend of mine. I’m just playing it by ear. I haven’t spoken to my parents in awhile.”
…
Q. What is the status of the relationship with your parents?
A. “I think the best thing is time. Give them time to repair themselves and think about who they are and what’s going on in their lives. Just to overcome any obstacles that they’ve had because of all this media. Then once it all calms down maybe we’ll have a chance to sit down. It was mainly the media [attention] that really upset them.”

Q. Will your continue with your LGBT advocacy?
A. “Definitely. I’ll march on any street in any town, whatever I have to do.”

In the interview, Martin also talks about his plans for Georgia Southern University in the fall and the solidarity he feels with his LGBT supporters. That feeling was probably fostered in part by the warm welcome he received during a few stops in Atlanta.

It’s here that the Atlanta Gay Men’s Chorus dedicated its “Georgia On Our Minds” concert in his honor (photos), and where he later attended the HRC Dinner with Goodman (bottom photo).