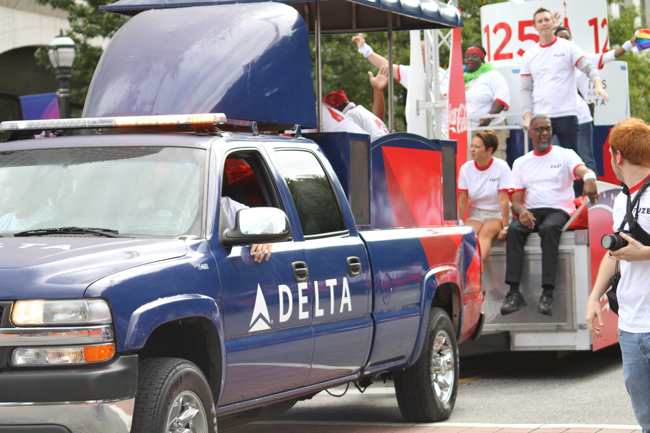 Delta’s pride in its hometown gays shows, yet not all of their employees are down with the gays. With guys like Michael Thomas in human resources, you have to wonder how the Atlanta-based airline manages to hire all those gay flight attendants. Thomas apparently doesn’t side with Obama on gay marriage. Nor does he agree with local pastors who preach about being inclusive. So he took to Facebook – yes, you can see where this going – and offered some fire and brimstone in response to a Atlanta Journal-Constitution article about the reaction of an Ebenezer Baptists Church pastor to Obama’s gay marriage declaration.

So much for a kinder, gentler, gayer approach at Delta HR. Thomas’ comments came among dozens and dozens of reactions to the Facebook post. More tolerant commenters immediately chastised Thomas for his vitriol and he either removed it or AJC moderators deleted it. But thankfully not before a Project Q reader grabbed a screen capture and passed it along to us. Thomas wasn’t the only commenter to scrape the bottom of the Internet for reaction. The AJC warned readers at least twice to keep the discussion civil. It’s Facebook, so that lack of anonymity is easily coupled with other tidbits about your life to pull together little ironies like the one Thomas lives – working for a gay-friendly company that sponsors Atlanta Pride, has floats in the Pride parade (photo) and helps AID Atlanta raise $745,000 while spewing anti-gay rhetoric. UPDATE: A Delta spokesperson, Betsy Talton, commented below on Monday that the name of the alleged employee does not match any current Delta employee. When provided with a link to the Facebook page of Michael Thomas, who posted the anti-gay comment, and asked if that person is a Delta employee, Talton on Tuesday declined to comment. "We are looking into it, but as it's a personnel matter we won't have additional comment," she said. Want to be a Project Q tipster? Send your news here.