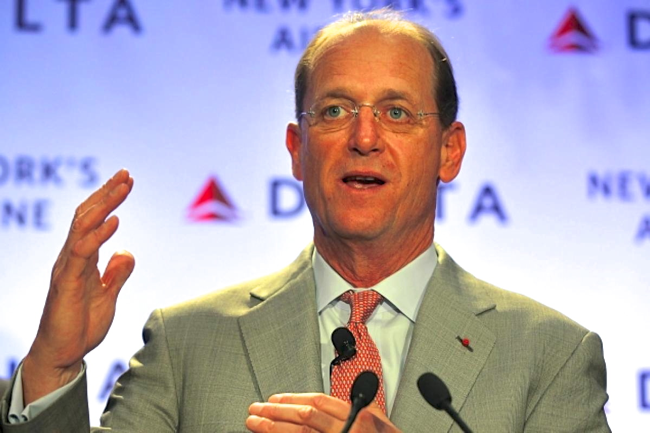 Delta CEO Richard Anderson and other influential business leaders in Atlanta came out swinging against efforts to pass "social legislation" in Georgia, calling the anti-gay measures harmful to business.

The comments from Anderson marked his strongest and most public yet since Delta came out against "religious freedom" bills in the Georgia legislature in February. As lawmakers quietly tried to pass the controversial measure on the last day of the legislative session in March – they failed – Anderson didn't hold back during a board meeting of the Metro Atlanta Chamber, which he chairs.

According to the Atlanta Business Chronicle:

“We are going to have to step up as a business community and take a much more active role in stopping this social legislation that doesn’t help us in the global marketplace,” Anderson, the CEO of Delta Air Lines Inc., told the top- tier group of business leaders meeting behind closed doors.

A week later, Anderson kept up his criticism.

“A number of us — Coca-Cola, Home Depot, AT&T — the very large employers, we did the same thing in Arizona,” Anderson said in an interview at Delta’s headquarters on March 27. “Companies that are transferring people here want to be in a community that respects the diversity of people’s views universally. That’s the standard now. Even the governor of Arizona vetoed that legislation.”

Delta joined other Atlanta-based business titans – Home Depot, Coke and IHG – in opposing the "religious freedom" proposals. But the comments from Anderson and other business leaders are a surprisingly public rebuke. Critics said the bills would allow businesses to discriminate against gay customers and could invalidate LGBT-inclusive non-discrimination measures in several cities across the state.

Other business leaders and groups joined Anderson, including the Georgia Chamber of Commerce. Its chair, Greenberg Traurig managing shareholder Ernest Greer, called the measures "extremist," according to the Business Chronicle.

“In this day and age of constant news and social media, ideas can unfortunately become movements all too quickly,” Greer wrote. “If we want to keep our elected officials from ceding to extremist political views, we as a business community must be equally vocal in opposition to those measures that could be harmful to our state’s economy.”

Carol Tomé, chief financial officer for The Home Depot Inc. and a past chair of the Metro Atlanta Chamber, said in an interview that the “religious freedom” bill that could have refused service to gays goes counter to what her company stands for. “One of our core values is respect for all people,” she said. “For us it’s very simple. If it doesn’t fit within our values, and if it’s bad for business, it’s not a good thing.”